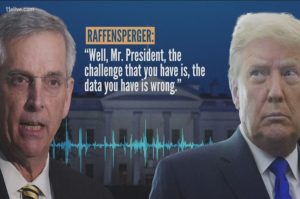 Fani Willis is the district attorney in Fulton County. She went to Howard University just as our Vice President, Kamala Harris. She is the daughter of a Black Panther. She was the first black woman to serve Fulton County’s chief prosecutor. She is the first black woman district attorney in Fulton County, Georgia. She has a lot of achievements under her belt. When she ran against her former boss of sixteen years she said “I’m dealing with a very desperate man who knows he’s losing.” Paul Howard eventually admitted to fourteen state ethics violations and paid a six thousand five hundred dollars in fines. There is still an on-going investigation into if it is also a criminal matter.

Fani Willis did not run on taking down Donald Trump. She took office on January 1st. Trump made the phone call to the Secretary of State Brad Raffensperger on January 2nd. She did not know such a high profiled case would be put in her lap but she did not run from it. Frankly she should not be the only one looking into what Trump did to try and pressure people to get him the votes he desired. Lindsey Graham was outed as well for pressuring Raffensperger. When asked he confessed, he also called Arizona and Nevada. Are any of us to believe that Trump did not have the same call sheet as Lindsey Graham? Logic would insist that one gave the other a call list to help calm his nerves. Just have a chat with some Republicans that root for you. Probably thought he’d give them a heads up before they get a call and put a little pre-pressure on them before the big train comes crashing through. Even though Raffensperger told America that Lindsey Graham called him and tried to pressure him, Trump still picked up a phone with a lawyer on the phone, (because you know lawyer client privilege) and tried to pressure a man who publicly said he wasn’t standing for it. We all know that is not how lawyer client privilege works but Trump has his own way of trying to circumvent the law.

I sit with a thought that this black woman, who did not ask to have this type of a national platform, is poised to be the first prosecutor in our history to indict a former president. Glen Kirschner once told “Bad” Brad Berkwitt in an interview on his show that once the first person indicts Trump then everyone else will line up to be next. I can only hope this to be the case. Fani Willis is a prosecutor that looks at the crime. If you look into her career, you see she has taken down some tough cases. I am really glad it was her who landed that job just when she did. Although some of us are impatient, okay me, we must wait because we won’t know anything overnight. It’s going to take some time and with any luck Trump will get indicted on something else real soon.

In the meantime, I have high hopes for Georgia’s case against a president that attacked us. I will continue believing that Garland is working a bulletproof strategy that cannot be broken through.