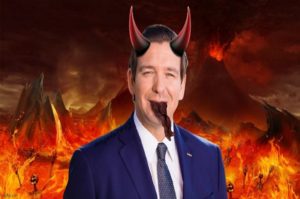 There is, unfortunately, no question that close to a majority of Americans are the scum of the earth.

(They voted for Herr Trumpler, didn’t they, and now, in Florida, they are supporting a shothead—and don’t forget to dot the “I”—of immense proportions.)

Ladies and gentlemen, what is happening in this country, from the SCUM of the Supreme Court to the GARBAGE who is now running Florida, is not just shameful but absolutely and literally criminal.

The lowlife who is now governor of the Scumshine State, an ardent supporter of Herr Trumpler, has convinced his minions, the state legislature and senate, to further gut the Second Amendment to the Constitution: that lowlife piece of manure has gotten them to withdraw any rules dealing with guns. The SoB is referring to it as Concarry, claiming it is every Americans right not only to carry as many guns as he or she likes, but, in addition, to neither register them nor account for their usage, and those SCHMUCKS, who have subverted and perverted the Constitution (not the least of whom was that PUTZ, the late and anything but great Justice Scalia, another total, absolute and complete piece of feculent feces.

The Second Amendment DOES NOT give every anus in America the right to run around with weapons but the garbage, the detritus, the scum of the FAR right conveniently overlooks the first phrase of that amendment, which is clear to all but the gun nuts and their associated brethren, for what the first phrase clearly states is, “A well regulated militia being necessary….” And those penis-brained morons think that calling a bunch of yahoos, yokels, muttpets, minkees, mutts, marooks and morons a militia fulfills that phrase, which it absolutely does not. “But wait! There’s more,” because now, Florida gubenator DeSatanis has decided that any nitwit, any nut case, any lowlife, degenerate piece of garbage can run around with any kind of weapon and that he or she no longer—in Florida—has to either take a gun safely class or register the weapon, so let me lay it out for you, because their insane and totally invalid arguments are both dangerous and completely false, and perhaps the worst one is, “well, if everybody were armed you wouldn’t have had the school shootings and other mass murders with weapons>”

Think about it. A crowd of richardheads with no training in how to properly use the weapon is suddenly in a position where some jerk is shooting at people randomly, and now, he, she, and the rest of the mob are hyperventilating, the nervous systems running amok, and they start firing, not calmly and carefully at the original shooter but at anybody who is holding a weapon, and the slaughters get worse from there.

My friends, this is a relatively short column this time, but it is simply unnecessary to continue to express facts and logic when we are dealing with totally illogical and completely witless people, so all I can do at this point is pray (I’m not a praying man, but I will for you) that you are never in that position, but, and if you are, that you will have the presence of mind to somehow either lie flat or get our of the range of fire, but, and again, I hope that it never happens to any of you.

PS: NO, I am NOT for “taking away everybody’s guns,” so please don’t start that FAR right wing hooey and nonsense, but I definitely and absolutely am for responsible gun ownership with training and licensing, and if you don’t feel that way or agree, then, my friends, more is the pity.