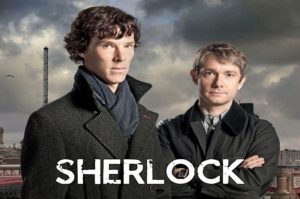 As British acting icon, Kenneth Branagh is donning the Poirot moustache once more for the big screen we get to debate what he has brought to the peculiar Belgian with the little grey cells. Whilst Poirot has, rightly, iconic status, the icon of them all is Sherlock Holmes. Reproduce anything badly with him at the center and you are tempting fate.
So, when, in 2008 it was announced, at the Edinburgh Television Festival, that the BBC were bringing Sherlock Holmes up to date with Benedict Cumberbatch in the titular role and Martin Freeman as John Watson, the excitement was palpable.

The terror would have been equally heightened.

Helming the project were the excellent creative pair, Mark Gatiss and Steven Moffat so we were buoyed by that fact. We recognized that whilst there may be liberties, they would not be liberal liberties. In the end it was a homage to the original with highly original twists and turns which we followed with such glee. It worked liberally well and gave us a new chapter in how we saw the great mind. In fact, the production used visuals to show its workings in a way we had never imagined before – when contemplating a problem, Sherlock’s mind palace was made visible onscreen.

It also did that quintessentially British television thing of giving us enough to be happy, but not enough to be full up. We still want more but given the stratospheric career trajectories of both Cumberbatch and Freeman, it is very unlikely that another series shall see the light of day.

What we did get was 13 episodes over 4 series with a seven-year run from 2010. Twelve of those episodes followed an updating of the stories – my favorite is how they brought the Hound of the Baskervilles to present day – with one of them produced as a Victorian fantasy which was a creative nod to the origin. In the US, I believe that PBS have them – if you are looking, and you should! It is after all, a BAFTA, Emmy and Golden Globe laden production!

Along with the principals we got some sterling support from Rupert Graves as Detective Inspector Lestrade, Gatiss as Mycroft, Amanda Abington as Mary Watson (Freeman’s real-life wife), the wonderful Una Stubbs as Mrs. Hudson and of course, Andrew Scott before being THAT priest in Fleebag as Moriarty.

What was possibly the greatest positive from the production was the clear reverence to the original. This was an update with care and attention to detail. Both Gatiss and Moffat were in tune with the originator, Arthur Conan Doyle. They were also aware that Doyle used the inventions of the day, made Holmes cutting edge and had tried to push the boundaries of science and detection. To remain true to his spirit, Holmes today would have to use GPS, texting and the technology at his fingertips to aid his brain. And so, they used that spirit to irreverently bring to date the stories they adapted with such flair.

And I loved it.

As well as the brilliance of the Hound of the Baskervilles, at the end of series two we got the update of the Fall at Reichenbach Falls with the third series needing to have it all explained to a Watson who is simply no fool. With lab technician, Anderson who was clearly infatuated by Holmes unconvinced he is dead she spends the time he is missing working out what happened.
When Holmes reappears and explains his absence, the British media had already speculated in the press over what had happened! Real life was mimicking the art of it all!

By the fourth series it was a fixture. We waited for it with baited breath but the 4th was to be the last one produced. There is a fifth in the pipeline, written and ready but it needs Cumberbatch and Freeman and they ain’t going to be available any time soon. Instead, we shall have to make do with whatever comes our way.

The brilliance of these episodes is not just taking the original stories like The Adventure of the Six Napoleons and making them The Adventure of the Six Thatchers, or the use of technology to bring the whole series up to date but the writing, coupled with the performances made this an excellent series to indulge into. We know that the original material is good, we have plenty of evidence that it continues to be mined, but the ability of excellent writers to take the original and then add to it, prior to handing it to people who are at the top of their craft delivers quite an extraordinary effect.