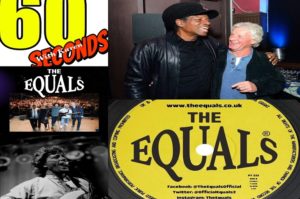 We all know Equals® from the massive hit “Baby Come Back” written by Eddy Grant. They are still going strong and will be releasing a new album later this year. The first single will be out this month and is called “Nobody’s got time”.

KB: The band was formed in 1965 and it didn’t take long, or you were opening for Bo Diddley, Solomon Burke, and Wilson Picket: How was this experience? You must have been very young at this time?

After the band was formed in 1965 we were playing in all of the major music venues like the Starlight Rooms, Queen’s Ballroom, Gaiety Ballroom, and also The Savoy Rooms where The Rolling Stones and The Who played, but it was at The New All-Star Club in Artillery Passage in May 1966 where we supported American R&B soul artists Bo Diddley, Solomon Burke and Wilson Picket –we became resident band during 1966 – I was only 17 but I knew we were destined for a future in music.

KB: Your monster hit ” Baby Come Back ” wasn’t even released as a single. It was the B-Side of Hold me closer. How did it become such a big hit?

‘Hold Me Closer’ was released in 1967, with ‘Baby Come Back’ being the ‘B’ side, but it didn’t quite take off in the UK, however, it did go global in Europe, especially Germany and The Netherlands, where it went to number one. A couple of weeks after its release, a German DJ liked the ‘B’ side-track (Baby Come Back) so much, that he gave it constant airplay leading the record company to then release ‘Baby Come Back’ as an ‘A’ side track as it was so widespread. This led to it becoming No.1 in the German charts and because of the massive success in Germany, ‘Baby Come Back’ was then re-released in the UK in 1968 and in no time at all, it soared high into the UK charts reaching a top position at No.1 for six glorious weeks and brushed the charts in America, giving President Records their only number one hit. We received a gold disc for one million sales in June 1968 and I was merely 19 years old.

KB: Eddy Grant wrote most of the songs? Did he write Baby Come Back?

Eddy was the band’s songwriter, lyricist, and lead guitarist – we had an infinitely talented band brother who led the band to the top, with the hits he wrote for us. He had an undeniable energy that made everything jump right out of the speakers and into your lap. He had that certain edge. If there ever were undertones to music or something you could read between the lines, then it was Eddy’s songs, especially our most famous hit ‘Baby Come Back’

KB: In September 1969 the whole band was injured in a car accident in Germany: What happened? And Eddy left soon afterwards to pursue a solo career?

In September 1969 whilst on the road in Germany, we were involved in a motorway car accident. Eddy and I were injured, Eddy quite seriously, and as a result he had to leave touring with us, but he continued to write songs for us, even though he couldn’t physically perform, but he was still a member of The Equals. Sixteen months later Eddy suffered a severe heart attack which forced him to evaluate his future and eventually after much contemplation and soul-searching he had to leave The Equals. In the late 70’s Eddy wrote two magnificent albums for the band, ‘Mystic Sister’ and ‘Born Ya’ both masterpieces, soulful, funky albums – which I believe are his best. His love for The Equals was endless.

KB: In 1982 The Equals was reformed, and you started touring again? How eager were you to get back on the road and perform?

After The Equals disbanded in 1979, I got a call from German music promoter, Rainer Haas (husband of Suzie Quatro) who wanted me to get the band back together as there was popular demand for us in Germany, and I did. We didn’t know what to expect after a three-year break, but the audiences couldn’t get enough of us, and we were in demand – it was euphoric. We never imagined we would have continued success a second time around.

KB: You are the only original band member since 1965: How does this make you feel and are you still having fun?

Both Eddy and I share the same passion for The Equals – its legacy, the love we have for the brand, the music we represent and our bond as brothers is limitless. I started my journey in 1965, so 57 years and hopefully can continue the legacy we all built, for many more years to come, because I’m still having fun!
Eddy still remains a big part of The Equals journey, by means of love and support. We are joint trademark owners of The Equals®, in UK, Europe and Worldwide and still best of friends and speak regularly.

KB: Do you have any new plans lined up? Gigs, Album? Your last album was Roots in 1995?

At present, The Equals® continue to play live to audiences in UK, Europe and Worldwide as well radio interviews. We are still recording music and have a new album hopefully coming out in 2022-23. We will be releasing a track off that album in May 2022 called ‘Nobody’s Got Time’, a song written by Eddy back in 1979 but was never officially released. We have live shows scheduled in Europe this year and a tour of Ireland later part of the year. Next year, with a new album finished we will be taking this on tour in 2023-2024 in Canada.