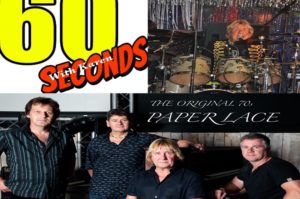 The band Paper Lace had a few big hits in the 70s: “Billy Don’t Be A Hero” and “The Night Chicago Died” which are still beloved today. They are still going strong and are touring.

KB: You formed in 1967 as Music Box, then changed your name to paper Lace in 1969: What made you change your name and why Paper Lace?

In fact, I joined the band ‘Music Box’ in 1967, which is where I met Cliff Fish who remains the other original in the band today. In 1969 I turned professional from being a Toolmaker apprentice for the previous five years, having played with ‘Music Box’ in a semi-professional capacity, I got married in that year also and the band took up a residency in a ‘Mecca’ dancehall in Rochdale for six months, we thought that this particular gig would sort the band out musically and just prior to the completion of that contract we decided to change our name to enable us to seriously launch ourselves nation-wide onto the entertainment industry. Looking for a name was not an easy fix but one of the guys had a book of things to make, a sort of hobbies/DIY book which contained a chapter on paper folding and tearing and had the title of “Paper Lace” I looked at it and said I think we’ve found a contender for the new name.

KB: You went on a TV show called Opportunity Knocks in 1973 and you won for five consecutive weeks: What made you decide to appear on that show?

Our management at the time had arranged an audition for a very popular TV talent show, “Opportunity Knocks” this took place in 1970, we attended the audition together with about a thousand other ‘hopefuls’ all competing for a place on the show, we played couple of numbers in front of a judging panel of three or four people, who wanted to hear more, so we played a couple more songs from the repertoire and they liked us, so we thought well, we’ll be on the show next week, this was not the case and after waiting six months or so we thought they had forgotten about us. In 1973 we had a letter from Thames Television to report to the Studios at Teddington Lock where they filmed the show, we thought it over and wondered whether we needed to be on a talent show at that point in our career, after all we had been making records, we had a couple of releases but no real success, then we saw that the show had a viewing audience of some seven million each week and we knew we had to be on the show.

KB: Mitch Murray and Peter Callander wrote the songs “Billy Don’t Be A Hero” and ” The Night Chicago Died” for you and they were 2 huge hits?

Peter Callander’s wife Connie was a fan of ‘Opportunity Knocks’ and she pointed us out to Mitch and Peter, who had already written a song called “Billy Don’t Be A Hero” they rang our management, arranged a meeting at Mitch’s house and in late 1973, we recorded the song. On March the 17th 1974 it got to number one in the UK charts and sold more than a million copies. the follow up to “Billy” was recorded soon after and when it was released in the U.S.A. it achieved number one status and sold more than three million copies, we received a Platinum Disc to commemorate those sales.

KB: Was the song “The Night Chicago Died” about the prohibition era and Al Capone and was that the reason it was so big in America?

The song “The Night Chicago Died” told of a Policeman who went out to do his duty and defend the city against the gangster Al Capone, the cop survived a gun battle and returned home, much to the relief of his wife and family. The song was therefore very popular with the police and indeed all the first on the scene emergency services, it has remained a popular song today and apparently had something of a resurgence, for similar reasons with the same organizations after the disaster of 9/11

KB: Today you are performing under the name Phil Wright’s Original 70s Paper Lace but there is also the band Paper Lace performing? 2 bands?

We perform under the name ’The Original 70s Paper Lace’ for legal reasons, someone else owns the name and they formed a band in 1984, called themselves ‘Paper Lace’ when the original members of the band had disbanded temporarily, we didn’t make the correct arguments at the time and when we reformed we lost the rights to the name, that other band had no original members and my understanding is that they have now ceased and no longer perform, the plan is to maybe re register the name at the appropriate time.

KB: You are also a member of The Original Jukebox Heroes? What music do they play?

I did perform with ’The Original Jukebox Heroes’ for some six years, This was a band who had links with several seventies hit bands, The Glitter band, Slade, Sweet, The Bay City Rollers, T-Rex and of course Paper Lace, we only performed the songs related to those bands but due to ill health and other personal reasons, a couple of the members left and I felt that because of those personnel changes it was longer the band that I had joined, so I too have now left but the band continues to perform.

KB: Do you have any shows coming up or maybe any new releases?

The Original 70s Paper Lace is performing on a regular basis for The Butlins Organization (Bourne Leisure) in their 70s Weekender Extravaganzas and we are in negotiations with a promoter to do a return visit to Australia, following the success of our tour there in 2017, The pandemic has decimated the music industry in general but gradually bookings are returning and we feel there will always be a demand for seventies hit artistes, during ‘Lockdown’ we have been involved in recording some reworkings of our original releases and some new material written by the band, which all goes to make up the exciting ‘Live’ set which we perform.