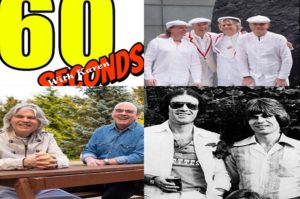 Who doesn’t know the song “Sugar Baby Love” by The Rubettes®? Still as great as when it was released back then. The band is still out there in the same trademark clothes and performing.

KB: Most people know you best from the song “Sugar Baby Love”: What is the story behind this great song and huge hit? (Response is from John Richardson)

I had been booked by Polydor records to play drums on a Rock n Roll album for them so that they may try to tempt a particular group to sign with them, (they were named ShowaddyWaddy) and had just won a nationwide TV talent competition. ShowaddyWaddy turned down their offer and Sugar Baby Love, one of the prominent songs on the album, remained “group-less” for several months.
Polydor however decided to release Sugar Baby Love and Andy Stevens (who was the general lackey at Polydor at that time) called me up, seeing as I’d played and sung on the recording and asked me to form a group around the song, which they were due to release. I did so and invited Mick Clarke and Bill Hurd whom I was with playing in a pub residency at the time, to be our bass player (Mick) and keyboardist (Bill) respectively.

The record started to get a lot of air play and rose into the charts and hovered for some time around the 51 mark. I also asked Pete Arnesen whom had also played piano on the session recording to join us and an old musician friend and guitarist Tony Thorpe whom I had played with several years before in the resident band of the famous Cromwellian Club in South Kensington. Then, Alan Williams, the guitarist singer was later conscripted when the original singer on the recording Paul Prewer (Da Vinci) showed no interest in becoming a member. So, the second phone call that I received from Andy was “We’ve got Top of the Pops John!” “Get down to BBC White City tomorrow with the boys… You’re on!!”

As you may know, Top of the Pops was the UK’s premiere TV music show and was responsible for pretty much “breaking” groups into the top ten. So, still feeling slightly weird about this surprising turn of events, I got the boys together and we travelled from our suburban homes in Essex to the big smoke (as London was known at the time). Something like your Big Apple but smaller and cloudier. None of us took it very seriously as most of us had pretensions that leaned toward more “serious” genres of music and felt that being in our mid to late twenties, pop stardom would sit rather incongruously upon our “serious musical” intentions.

We had all pretty much come up through the late 50’s and 60’s and our idols were The Shadows (who were at this time, sadly last year’s crushed velvet) so we thought lets revive the moves and steps they made famous in the late 50’s and early 60’s and thus our image was born…Thinking it all to be a jolly good laugh we did the TV filming sporting a carefree, tongue in cheek attitude. Then after filming as muso’s are wont, we saw more of the Top of the Pops hospitality bar on the 4th floor than perhaps we should have and woke up late the next morning replete with headaches remembering precious little of what had transpired the day before. In short, we put it all behind us as just another job that the itinerant musician is called to do from time to time, little did we know that our tv appearance had captured the hearts of the nation and in two weeks’ time it had risen to the number one position.

KB: Your trademark was white suits and cloth caps: Who came up with this and why?

We just saw the shop with these bright suits and caps as we sped by on our way to the show and screamed to the Taxi driver…Stopppppp!!! We stopped off at a popular clothes shop in London’s Oxford Street, quite near Carnaby Street and (due to the rush we were in to make it to the studio on time) just grabbed 6 white suits and caps which were eye catchingly displayed in the shop front. They were a spin off from the film “The Great Gatsby” which was doing the rounds at the time and to match we chose those 1920’s black and white brogue shoes. Then we thought “Ok, we have an image now but what shall we do during the song”

KB: Paul Da Vinci did the lead vocals on Sugar Baby Love, but he did not join the band? Why was that? (Response is from John Richardson)

Paul had his own deal as a ‘solo’ singer set up and he thought his chances were greater going it alone, so we chose Alan Williams as his replacement. Interestingly, when Paul saw what happened to us the old green eye got into action. He found himself a lawyer. Went to Polydor and said give me a cut of the record’s profits otherwise I will scream to the world that it is my voice and not Alan’s that graces the record and this won’t be good for the group if I do that. So, Polydor had previously granted the group 9% of the record and after Paul’s threats to shut him up they gave him 6% of our 9% leaving us with a half % of the record each…That was quite a blow for us but worse was to come. After Paul Da Vinci had done this, he still went to the press and declared how it was him and not Alan Williams who had sung, so our credibility went from being the cream of the crop to a bunch of nincompoops. Which, as you can guess was not an enviable position to be in.

KB: In 1976 you sang a more serious song “Under One Roof” about disowned gay man who was murdered by his father: That was heavy stuff even for that time? Good for you! (Response is from John Richardson)

I guess at this time I wanted to have a stab at writing the singles and setting a slightly different musical tangent for the group. Up to that time Wayne Bickerton and Tony Waddington were writing all the singles and thus the groups direction was dictated to by these guys. As grateful as we were to them for bringing success to our door, we also wanted to take a turn at the steering wheel and have a shot at this elusive butterfly of writing success that so few folks ever achieve.
Shortly before this I had written ‘Baby I Know’ which got into the Top Ten in the UK, and we fancied our chances heading in a more country rock direction. Unfortunately, this was the first of our records where Top of the Pops refused to have us play on it. And although it was a turn table hit, Top of the Pops appearances evaded us and with the nature of the song we needed TV “acceptance” which was sadly not forthcoming. We did however get exposure on Supersonic a contemporary of Top of the Pops, but its viewing figures could in no way compared to The BBC’s. So, it lay sadly floundering if not dead in the water

KB: You have your own radio station that only plays Rubettes music? (Response is from Mick Clarke)

I believe you are referring to “Jukebox Jive Radio” which used to be a licensed radio station on a previous promotions company’s website but is no longer in use.

KB: Are there artists you currently like you would love to collaborate with? Are you currently on tour or have something new coming out? (Response is from Mick Clarke)

Collaborations can be very interesting and very popular now, but if there was an opportunity then it would be Jeff Lynne and Paul Carrack.
We have a new song from our forthcoming album, called ‘Together We Stand’, which will be released soon. Dates are now starting to come in from rescheduled shows in 2020-2021 now that the pandemic is slowly fading, which is great news as the music industry/live music was badly mainly affected. We have a Canada tour scheduled for 2023-2024, so all very encouraging.

KB: If you were to make an album with 7 of your favorite songs (No Rubettes songs): Which songs would you choose and why? (Response is from Mick Clarke)

What a great album that would be for me! I would love to cover, although narrowing it down to 7 is almost impossible! so here it goes … The Voice, The Living Years, Lonely Teardrops, Have You Ever Seen the Rain, Just One Look, Photograph.