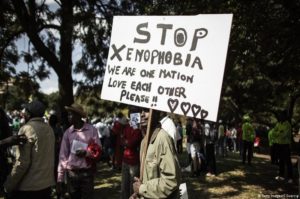 Xenophobia hasn’t gotten old for the Republican party. Six years after former President Donald J. Trump first paved his way to the White House on nativist and xenophobic appeals to white voters, the Mexico–United States border has once again become a fixation of the Republican Party. This time the issue has come with a new twist: claiming unauthorized immigrants are gaining access to the ballot box. This keeps the xenophobia fed in their base. Voter fraud is exceptionally rare, and allegations that widespread numbers of undocumented immigrants are voting have been repeatedly discredited. Yet that fabricated message—which capitalizes on advancing Mr. Trump’s broader lie of stolen elections, has found receptive audiences in more than a dozen states across the country, including several far from the U.S.–Mexico border.

Comments from voters such as Mark Checkeroski saying, “I don’t want them coming into red states and turning them blue,” are heard more often. A lot of anti-immigrant sentiment and myths still get circulated such as: Immigrants will take our jobs and lower our wages. Immigrants are especially crime prone. Today’s immigrants don’t assimilate like previous immigrant groups did. Add to this Trump whipping up fears of “open borders and horrible elections” at recent rallies and calling for proof of citizenship at the ballot box. The latest fear-mongering about immigrants stealing votes is just one line of attack among many, as Republicans have made immigration a focal point in the midterms of 2022 and Republican governors face off with the Biden administration over what they say are dire conditions at the border. It has become so ridiculously overplayed to the point that states far away from the border blame their crime on immigrants coming from Mexico.

Jane Timken, a U.S. Senate candidate, and former chairperson of the state Republican Party said the border with Mexico loomed large for Ohioans because many saw the state’s drug and crime problems increase. “Almost every state is now a border state,” she said. Wait, how is this possible when we have maps and know which states are truly border states? Are the voters that uneducated or that willfully ignorant regarding local geography? Our nation grows more diverse, but the unwarranted fear and focus on immigration by Republicans harnesses the unease stirred by shifts in the demographic. “When we feel so much anxiety, that is the moment when xenophobic, anti-immigrant sentiment can flourish,” said Geraldo L. Cadava, a historian of Latinos in the United States and associate professor at Northwestern University.

Few races nationwide capture the dynamics of the issue like the GOP Senate primary in Ohio. Contenders there are taking after Trump, who in 2016 tried to blame illegal immigration and Mexican drug cartels for the deadly opioid crisis. An ad for the Senate candidate Ms. Timken opens with grainy footage over ominous music, showing hooded men carrying packages presumed to be filled with drugs across the border, until Ms. Timken appears in broad daylight along the rusty steel slats of the border wall in McAllen, Texas. Ms. Timken said she understood the state needed immigrant workers, citing her Irish immigrant parents, but said people still must cross the border legally. This is playing upon fears with misinformation and misdirected anxiety. Mike Gibbons, a financier at the top of several Ohio polls, said insisting on law and order was not xenophobic. “You don’t hate immigrants if you tell that immigrant they have to come here under the law,” he said. But across this state in the nation’s industrial belt, anti-immigrant sentiment tends to run as deep as the scars of the drug epidemic.

Anger and resentment toward foreigners started building as manufacturing companies closed factories and shipped jobs overseas. A lot of Republican voters believe that Biden’s immigration policy means more Democrat voters are “pouring” into this country. They make the assertion that unauthorized immigrants are crossing over and gaining access to the ballot to support the left. Trump himself made that false claim back in 2017, without evidence, going as far as stating between three million and five million unauthorized immigrants had voted for Hillary Clinton. Now the base gets to alternate between that lie and believing that the 2020 election was stolen from Trump. The messages are tailor-made for Trump rally attendees like Alicia Cline, 40, who said she believed that Democrats in power were using the border crisis to get more voters.

“The last election was already stolen,” said Ms. Cline. She continued to explain her belief that the Democratic establishment is using the immigrants coming from the Mexico–United States border to support them at the polls and get more votes for themselves. These are the kinds of delusional beliefs that keeps the GOP base motivated. This is what we’re up against and why we need to keep Democratic and Independent voters fired up about the issues facing all of us. We can’t afford to have more fringe politicians with misinformed ideas being poured into the public. We can’t afford to allow hatred of immigrants to disguise itself and come out through voter fraud conspiracy theories. There are tangible ways that we can help promote and protect voting rights in our own community. Renew a commitment to electing the right people everywhere from school boards to the Senate. We need to do that in order to keep resisting those who would take America backwards.