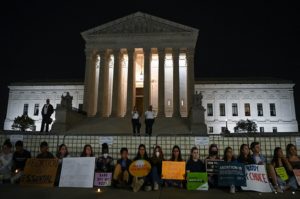 Monday, we learned of a leaked draft of a Supreme Court opinion, suggesting the court’s conservative majority is poised to overturn the landmark 1973 decision legalizing abortion. The draft decision, though not final, sent shockwaves through the country. Overturning the Roe v. Wade decision would give states authority to decide abortion’s legality. Half of the states, largely in the South and Midwest, are likely to quickly ban abortion. If abortions are outlawed, many of the women—often poor, will have the hardest time traveling to distant parts of the country to terminate pregnancies or raising children they might struggle to afford. Speaking with someone who is Black and once volunteered at an abortion clinic gave me more perspective on the high stakes involved. She didn’t want to be named, but she wanted me to quote her directly, “People are going to have to vote and stop thinking elections don’t matter. People are going to have to put the people in place to make the decisions that protect not hurt people. When they don’t because they think it doesn’t matter, then things like this will keep happening.”

Another citizen who has worked in abortion clinics in the past, said many anti-abortion laws have been crafted in ways that hurt low-income women. She pointed to the Hyde Amendment, with which I wasn’t familiar. This is a 1980 law that prevents the use of federal funds to pay for abortions except in rare cases. She also cited the 2021 Texas law that bans abortion after around six weeks of pregnancy. Where she lives, near the U.S.-Mexico border, women are forced to travel to obtain abortions and have to pass in-state border patrol checkpoints where they must disclose their citizenship status. The implications of abortion laws seem to carry a heavier load for anyone who isn’t white, and it isn’t an accident or coincidence. Conservatives are about to get everything they ever wanted, at least if the leaked draft opinion from the Supreme Court is any glimpse of our collective future. This should worry all of us!

Notice the right-wingers were upset when Politico published the good news for them Monday night. I don’t know if they were afraid the leak would somehow disrupt their impending victory, or they didn’t want others knowing about these decisions and preparing. If there’s transparency around how these Supreme Court decisions are made, a kind of glimpse behind the curtain, we would all realize these are five people placed there for a political purpose. Biden said the same arguments that were included in the draft opinion could also be used to strike down the right of gays and lesbians to marry as well as constitutional protections for birth control. The nuance is that these unelected legislators on the Court would be able to make sweeping policy changes for the country and in secrecy. What are the rest of us to do? This is just another example of elections having consequences.

Three justices were placed in position during Trump’s term as president and Senator Mitch McConnell’s was more than happy to push for this to happen in record time. Besides the fact that they serve for life, Supreme Court justices truly cannot be held accountable in any way if their decisions stray from established case law. As a member of the Republican Party, McConnell previously served as Senate majority leader from 2015 to 2021, and as minority leader from 2007 to 2015. Keep in mind, McConnell was first elected to the U.S. Senate in 1984 and it’s so hard to believe Kentuckians keep voting for him. If we fail to connect the results of this year’s midterms to the issues at stake, and fail to reassert the power of the legislature, we will continue our backward slide. Look at what happens without the votes in the Senate to advance bills. Biden supported the Women’s Health Protection Act, legislation to enshrine into federal law the right to access and perform an abortion. The bill passed the House last year but failed in February to get enough Senate votes to advance. Democratic Sen. Joe Manchin of West Virginia voted with Republicans against the legislation. Even if all Democrats backed the bill, it would not have enough support to overcome a filibuster. Again, the midterm elections can determine much of what is going to happen next.

A lot has changed in the nearly 50 years that separate the constitutional protection of the right to abortion in the U.S. Think of a snapshot of life for women prior to the landmark Roe v. Wade case, think of life for Black people before several significant legal precedents, think of life for immigrants, for people in interracial relationships, for those of the LGBTQ+ community before the 1950s,1960s, and 1970s. It may seem like an extreme comparison for me to draw but it isn’t—not when you reflect upon the history of our nation. Yes, I still love my country, but I hate what it has stood for many times. How can we deny it’s laws and systems were built up by minds of landowning and slave owning white men who were not concerned with rights for their own mothers and daughters at the time? Think about that when you believe there isn’t anything to worry about with Supreme Court justices who in their conservatism believe the Constitution and traditions of this land are more than enough to give a quality of life for all to enjoy. Yes, life would be enjoyable for a few, and we know what could happen to the rest of us if we “sleep” on this.