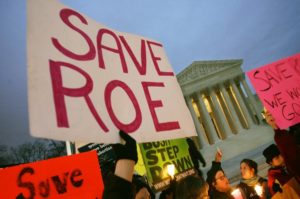 In 1973, the most notorious Supreme Court case became monumental as the decision in Roe v. Wade mandated a woman’s right to choose over her body became part of the federal government’s authority and platform. After a leaked drafted opinion, it may cease to exist this summer.

Over these same last five decades, President Joe Biden has completely re-evaluated and changed a few of the beliefs he’s held. Previously he has apologized to marginalized communities about his support for the “War on Crime” that took place in the 1980s and 1990s.

As a Democrat, we have assumed that the extremely devout Catholic is also pro-choice; in a sense he is. But to think of him as a loud voice that will champion for the legal solidification of Roe into our laws is more of a fallacious idea than a reality. Even when asked about this weeks top headline, the president still seems reluctant and looks like he plans to stay as more of a quiet supporter.

It all started with a leaked draft, and at this point it remains uncertain where Roe and Casey will stand after Justice Samuel Alito’s draft opinion overturning both landmark SCOTUS cases was leaked earlier this week. While the GOP continues to scream on having an investigation, which Chief Justice John Roberts has already launched, or blame soon-to-be Justice Ketanji Brown Jackson, like whack jobs on Newsmax did even though she hasn’t even started her new job; there is a lot of uproar at over the revelation. Currently, there’s a massive investigation amongst the walls of our nation’s most powerful court to expose the leak source, and barricades erected due to the mass protesting that has already begun — and will likely continue until we hear the court’s official decree.

Yet here we are, with the country possibly regressing 50+ years even though almost 80 percent of all Americans support Roe due to certain aspects, and it’s looking like there will not be any legislative action to solidify its legal standing. Sen. Susan Collins (Idiot-ME) has already said she won’t support the bill making its way to the Senate currently as it doesn’t protect Catholic hospitals and their right to not perform an abortion. Yes, this is her actual reasoning which makes sense why she believed Brett Kavanaugh and Amy Coney-Barrett when they said they wouldn’t overturn Roe as it was a settled precedent already understood by the court.

Meanwhile, Susan Collins and countless others like herself that share the same views are so concerned about Catholics having to perform abortions yet share no concern over the thousands of children — with heartbeats — who have been abused by the church, who err shot in school because of those 2nd Amendment freedoms they scream about, or who go to bed hungry every night because these same pro-lifers are owning the libs and their socialist agenda by defunding and canceling social welfare programs like TANF (food stamps), voting against expanding Medicaid so that all children are guaranteed healthcare coverage, against free school lunches, implementing gun regulations like universal background checks, and all other services and programs that might actually help those children already here with a heartbeat.

The same people who bitched and moaned about wearing a mask during a pandemic (an invasion of their “personal freedoms”), or who followed into the conspiracies of the vaccine being just a way for the government to microchip and kill you (even though less than 1% of Covid deaths came from the vaccine; actually less than 1% of any deaths were caused by the vaccine).

It’s time to be as clear as…

In the United States, a country that doesn’t offer universal healthcare, paid family leave, free-or-low cost tuition for higher education, free birth control or other contraceptives while promoting a system that sends us into abysmal depths offered by the current financial and insurance system really exemplifies the true purpose behind such a possible decision. Excuse my french, but it takes a lot of fucking cojones to sit comfortably from a bench where you’re basically untouchable or comfortably making $175,000 to spread lies about the 2020 election cause you couldn’t just shut the hell up and accept a loss, all while implementing those same realities I mentioned previously to fight for “pro-life” which in actuality is just forced pregnancy and birth.

Let me just get straight to the point, if it had anything to do with actually being “pro-life” they’d support the initiatives listed above. Instead, there’s states like Texas where lawmakers have tossed around the idea of banning pregnant women from traveling across state lines to ensure they aren’t going to get an abortion in a pro-choice state. In these same states they’ve already implemented laws that allow public bounties on the heads of women and their healthcare providers even if it’s just an assumption that someone participated in an abortion after six weeks of pregnancy. But God forbid you ask one of them to wear a mask on a plane during a deadly pandemic or ask them to complete a questionnaire on their personal history to purchase an AR-15. That’s when we’re crossing the line *eyes roll to the back of my head*.

We are at a pivotal moment in our nation. We are completely divided, and the last institution that was (kind of) still respected is about to lose it’s legitimacy and ultimately it’s authority with what they choose as Roe’s final outcome. It’s a time where you may not be able to terminate a pregnancy if you were raped, but as long as you’re married to a SCOTUS Justice then you can totally attempt to overthrow a free and fair election if you don’t like the outcome and without an investigation. You can even testify in front of the Senate committing yourself to the belief that Roe has been set as a precedent just to potentially overthrow it years later.

The entire SCOTUS is on the verge of a Madison Cawthorn level fall from grace. Hell if you use Alito’s argument for overthrowing Roe you could technically apply it to every case since Plessey v. Ferguson. No matter if you’re a man, woman, person, camera, or TV this is one fight I beg you to not sit out on. If we don’t, this is setting a precedent for a much darker nation for more than half of the people who call it home.

You remember those good ole days they kept screaming about going back to? Well it’s coming unless we collectively stand together against this.