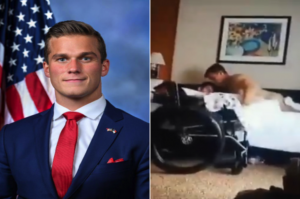 It seems that everyone in Republican politics has turned against the youngest member of Congress. Rep. Madison Cawthorn (R-NC) rose to prominence after winning his seat in 2020 in an upset election. At the time, he was backed by Mark Meadows who held the seat previously before leaving to become President Trump’s Chief of Staff. Now, Meadows and the rest of the NC GOP have taken a different approach to the young congressman and are backing his closest opponent in the upcoming primary election in NC.

The “sexual perversion” claims stem from multiple leaks of the congressman in comprising pictures and videos. First came the picture of Cawthorn in women’s lingerie that he claimed was from his time as a guest on a cruise game show. Then another video of his aide and cousin, Stephen Smith, grabbing, Cawthorn’s crotch in the car was brought to light. To top it off, they saved the best for last when another video of Cawthorn and the same cousin was leaked where Cawthorn appears naked and thrusting his crotch into the face of a man on a bed. He called the actions “crass” humor on Twitter. “We were acting foolish, and joking. That’s it,” he said. “I’m NOT backing down…blackmail won’t win”, Cawthorn said in a tweet.

Cawthorn is also facing a number of legal problems. Although the case to have him ineligible to be on the ballot has fallen through, the congressman is still facing other non-GOP related scandals. On two separate occasions, he has attempted to bring a loaded firearm in his carry on luggage on a plane, most recently in April 2022. He’s also facing potential jail-time for driving his car without a license and two other misdemeanor traffic charges. His upcoming court date for said charges is later on this month.

Something tells me that Cawthorn is going to go through a lot of things. What I’m really curious to see is if this is what they’ve got on someone as new as Cawthorn who isn’t even through his first term, imagine what they have on the rest of the congressional GOP members. If there’s anything we’ve learned from this is that with Republicans there’s always a tape!