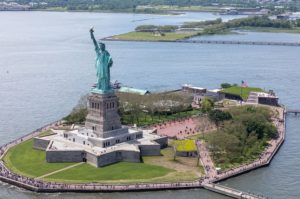 Renpet (the feline member of the Curmudgeon household, formerly a CIA officer and allegedly retired) was seated next to Freya, her niece.

Freya had been spending time with her Curmudgeon family while her parents were traveling.

On the couch between them was an open gift box sent by Freya’s parents. Nestled in layers of tissue paper reposed a colorful pillow with the Statue of liberty embroidered upon it.

“What is that lady holding a funny thing doing on my pillow?”

Removing the pillow from its box, Renpet placed it next to the kitten.

“This lady is very important. She was embroidered onto your pillow, because she’s a national treasure. She was a beautiful gift to our country.”

“Well, you are such a good kitten that I’m going to tell you a little about her, but you must promise to go to sleep after the story. Freya, my little angel, it is way past your bed time.”

Hunching her back in protest, the kitten retorted, “Well, I want the story, but I cannot promise to go to sleep right after, Auntie!”

“Well, in 1865, a Frenchman by the name of Edouard de Laboulaye had an idea.

“This gentleman was a professor of law and he was very supportive of the ideals of freedom and liberty as exemplified by the United States. Laboulaye was passionate about America’s abolition of slavery. So, he thought it would be a magnificent symbol if the people of France gave a gift to the American people.

“And you know, dear, that we use Wikipedia for a lot of help. I just found this on my laptop from Wikipedia:

‘The project is traced to a mid-1865 conversation between Laboulaye, a staunch abolitionist, and Frédéric Bartholdi, a sculptor. In after-dinner conversation at his home near Versailles, Laboulaye, an ardent supporter of the Union in the American Civil War, is supposed to have said: “If a monument should rise in the United States, as a memorial to their independence, I should think it only natural if it were built by united effort—a common work of both our nations.’[

“And so, Laboulaye enlisted his sculptor friend, to design the lady on your pillow. She is called the Statue of Liberty.

“She wears the robes of the Roman Goddess of liberty. A goddess should have a crown, and hers has spikes that represent the rays of the sun reaching out to the world.

“She has a tablet in her left hand with July 4, 1776 inscribed in Roman numerals and in her right hand, she holds high a torch to welcome immigrants. Near her feet, you can see broken chains and shackles.

“And, just imagine, Freya, how large this statue is! Her torch alone is twenty nine feet long, from the bottom of its handle to its very tip!”

‘Bringing our lady to the United States was a magnificent effort between people of different countries: from concept to design to fundraising to construction and assuring her safe voyage across the Atlantic.

“And, although it is late and past a good kitten’s bedtime, I do want to recite a poem that is at the entrance to the statue.

“It was composed by Emma Lazarus in 1883 and she named her sonnet, The New Colossus

Not like the brazen giant of Greek fame,
With conquering limbs astride from land to land;
Here at our sea-washed, sunset gates shall stand
A mighty woman with a torch, whose flame
Is the imprisoned lightning, and her name
Mother of Exiles. From her beacon-hand
Glows world-wide welcome; her mild eyes command
The air-bridged harbor that twin cities frame.
“Keep, ancient lands, your storied pomp!” cries she
With silent lips. “Give me your tired, your poor,
Your huddled masses yearning to breathe free,
The wretched refuse of your teeming shore.
Send these, the homeless, tempest-tost to me,
I lift my lamp beside the golden door!”
“And now, our lovely lady lives in New York, rising high for all to see, a welcoming beacon of liberty.”

Hearing a soft purring, Renpet looked at her niece, gently sleeping on her new poofy pillow.

As Renpet carried Freya and pillow upstairs to bed, she hoped the kitten was having sweet dreams of a towering icon of enlightenment and liberty.