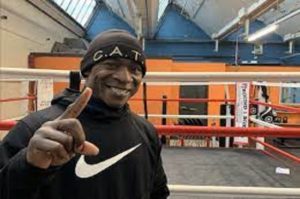 A British cruiserweight who had a fantastic career in the ring, Carl Thompson, 34-6, 25 KOs, is often forgotten amongst those he fought but from his debut in 1988, until his retirement in 2005, his career is one that merits a great deal of respect.
A crossover fighter – he fought for World titles at Muay Thai, twice – he was a world champion, as well as holding the British and European titles in his second, and more lucrative career in the square ring.

He turned professional in 1988 with his debut at the Free Trade Hall in Manchester where he stopped Darren Mckenna in the 2nd round of a scheduled 6. His beginnings in the business were not all plain sailing and when he fought for the Central Area title in 1989, he was stopped by Crawford Ashley in the 6th round himself and then in 1991, stopped by Yaw Davis in Fontvieille, having been beaten on points the year before in Amandsberg!

As I repeat myself often, this was a time when losing was not an issue and part of the process of becoming a better fighter.

His first belt was the British title which came his way in June 1992 when he stopped Steve Lewsam in the 8th round in Cleethorpes. He followed that up with a two-round demolition of Arthur Weathers at York Hall in February 1993 for the WBC international strap.

Now we were talking…

His ferocious punch power was getting noticed and the European title became his when in February 1994, in Ferrara, Italy, he beat Massimiliano Duran by knocking him out in the 8th. A successful defense in Marne, France against Akim Tafer followed, when he knocked him out in the 6th.

It was clearly time for world honors and along came the opportunity to so do for the WBO version of the title.

On the 10th of June 1995, in Manchester his opponent was Ralf Rocchigiani. Rocchigiani won when in the 11th, Thompson was forced to retire due to a dislocated shoulder. At the time of the stoppage, he was well ahead on all three scorecards.

The rebuild saw him raise his own career from the shoulder injury and he went back to rematch Rocchigiani in Hannover. On points he avenged his loss and became the WBO champion by split decision – one judge gave it to Rocchigiani by 115 to 113 whilst the other two gave it to Thompson by 119-109 and 117-111!!!

Successful defenses followed with Chris Eubank being one of them in April 1988, before he lost it in a stoppage that was dubious against Johnny Nelson in 1999.

Whilst the Nelson fight is often mentioned and quoted, it was the war with Eubank that stepped on the toes of history; unfortunately for Eubank, history blew back. Eubank jumped not one but two weight divisions to go from a super middleweight champion to try and become a world champion at cruiserweight. He must have thought that he had a better chance of winning his third weight division world title by beating Thompson than anyone in the light heavyweight division. He was deluded but not that deluded.

At the time there were only two other British boxers who had won three world titles in three weight categories – Bob Fitzsimmons and Duke Mackenzie. This was history in the offing. This was also Thompson’s first defense, on the Naseem Hamed/Wilfred Vasquez undercard. Manchester was going to get the full panoply of British boxing characters. Hamed was not to disappoint and neither did the strutting and confident Eubank. He looked chiseled and every inch the villain as he entered the ring ready for the scrap.

Eubank started the better of the two and at one point had Thompson reeling and throwing wildly. But then he stood back. Many believe the effect of the Michael Watson fight meant he had lost or lessened the killer instinct that would have finished this contest. Whatever the reason he stood off his opponent and Thompson rallied. By the second half of the fight, Thompson who had hit the floor in the 4th had done just enough to retain his belt. Eubank was kept in hospital after the fight, such was the damage. Those who saw it live believe that it was a sure-fire candidate for Fight of the Decade. Losing and then bringing enough out to win appears to have been a motif that was to repeat itself later.

He was to rematch with Eubank and win again, 3 months later with the doctor stopping the fight as Eubank’s left eye was so damaged, he could not see out of it. Eubank was to never fight again.

Then in Derby, on the 27th of March 1999, he was stopped in the 5th whilst behind by a man with 12 losses on his record – Johnny Nelson who was now the new WBO champion!
He went back to his drawing board, regained the British title by knocking out Terry Dunstan in December 1999, then took back the European title by stopping Alain Simon in the 6th round in Barnsley in May 2000, defended it in September 2000 – stopping Alexey Ilyin in the 2nd round.

Then in February 2001 he became the IBO world champion when he stopped Uriah Grant in Manchester in the 5th round! He was a two-time world cruiserweight champion! Nine months later, he was knocked out by Ezra Sellers in November 2001 at Manchester and lost the IBO title.

He got it back when in February 2004 he was in against Sebastian Rothman in Sheffield. Severely beaten throughout the contest and with little or no hope, he got to the ninth round. Stuck on the ropes, the referee was poised to stop the contest when Thompson his opponent to the center of the ring, took advantage of a momentarily lapse in concentration by the South African and floored him.

He should have retired and most thought his luck would run out.

At the age of 40, he went in against David Haye. A young pup – Haye was 23 – this was a fight nobody really expected to go Thompson’s way. Haye came out fast and Thompson struggled initially and then in the 5th Thompson’s power came to haunt Haye. Haye was tiring and Thompson growing. Haye got sent to the floor, Thompson got emboldened. Haye took further punishment and Thompson saw the towel coming in from Haye’s corner and his hand raised. His luck was still with him.

But the end was nigh. In 2005, after winning on points against Frederic Serrat in Sheffield, the retirement came. It was his next fight, after Haye, 14 months on.

His career was one that lit up the ring and showed fights domestically that were well worthy of our attention. He was no bit part player but central to why we had such a stellar time in the late 90s and into the new millennium. The headline acts made the headlines because they had such assured and dangerous dance partners like Thompson. /