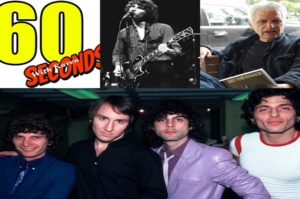 M M M My Sharona …. We all know this song by The Knack! It is still as good as it was back then. Berton Averre is one of the two surviving members of the band.

KB: You are guitarist and one of the founders of the band The Knack: Where was the band founded and how did you meet the other guys? You and Prescott Niles are the 2 only surviving members?

We were a Hollywood band. I first met Doug, the lead singer and leader of the band, working in a backing band for a singer, Rob Carmichael. Doug was playing bass, and said “I like the way you play, and I’m looking for someone to write songs with.” Our song writing partnership eventually became The Knack. Doug knew Bruce Gary, our drummer, and we had played with him several times. Doug told Bruce of his desire that we form a band, and Bruce recommended a bass player, Prescott. Yes, Prescott and I are the only surviving members.

KB: The Knack had a huge hit with My Sharona: What is the story behind this song?

When we first started playing the clubs in Hollywood as The Knack, there was a group of girls who were huge fans, and we came to call them the Knackettes. One of them was Sharona Alperin. Doug was crazy about her, and when I came into a rehearsal with the riff that we all know now as the My Sharona riff, and jammed on it with Bruce and Prescott, Doug said “That’s great, let’s write a song with it.” We did, he started stuttering about Sharona, and rest, as they say, is history.

KB: When The Knack signed with Capitol Records, you were given the largest signing sum in the label’s history. Curious: How much was it?

I honestly can’t remember. I think putting it that way makes it sound grander than it was, because a new band with no track record isn’t going to get the kind of money, you’d imagine established stars get. It’s true that Capitol really believed in us.

KB: The band split up in 1982 and then got back together again in 1986 until 2010 when Doug Fieger died: That must have been a terrible blow? Are you still performing currently?

Losing Doug was, yes, a terrible blow, and we don’t perform anymore as The Knack. I never budged off my decision that I wouldn’t feel right playing under that name without Doug.

KB: You are an arranger who toured with Robby Krieger, Bette Midler, The Cowsills and Sarah Brightman? What do you do as an arranger?

I was never much of a session musician. I played on a Cowsills record, worked very briefly in the studio with Bette, did a jazz fusion tour with Robby, and played on and basically arranged a cover version of Love’s “Alone Again Or” for Sarah Brightman, whom I never met. Doug and I also sang harmonies on a Ringo Starr record (Doug and Ringo being good friends), and arranging harmonies always fell to me, so that’s another credit I suppose.

KB: I read that you and Rob Meurer were writing and composing musicals together? Tell me a bit more about this?

Oy. So very hard: there are so many great songs, all quite different from themselves. Do the musicians have to be alive? Working with Laura Nyro would have been a dream come true. Stevie Wonder. Paul Simon. There are my three. Seven songs, huh? Well….

If You Gotta Make A Fool Of Somebody — James Ray
Highway Star — Deep Purple
American Tune — Paul Simon
Only A Fool Would Say That — Steely Dan
Softly As I Leave You — Matt Monro
Wasn’t That A Time — Peter, Paul, and Mary

Best I can do.
All the best,
Berton