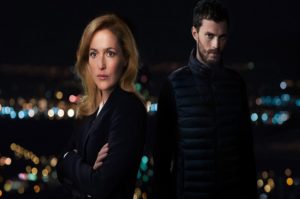 Every so often something comes along that catches you by surprise. The Fall was one such thing because it took so much from so many unlikely places and placed it all together in a formula that just worked. It made me wonder how it was pitched to the BBC.

“Remember the woman in the X Files? Well let’s have her put into Belfast, get her a stalker as a a serial killer on the loose make her an important police officer and see how it pans out?”
To the imagined suggestion that they get the other half of the X Files duo to play the serial killer – what a twist that would have been – they instead employ a former model who goes on to become the guy in the Fifty Shades trilogy… Jamie Dornan.

And that was the reality it became…

This was Dornan’s first big break – playing alongside Gillian Anderson in this taut three series thriller which gripped us all from 2013 to 2016. It is an example of why the BBC, a publicly funded television company, can take risks that will pay off creatively and that we, in the UK, must not lose.

Set in Northern Ireland and a coproduction between the BBC and the Irish broadcaster, RTE, Detective Superintendent Stella Gibson, played by Anderson, is a London based police officer sent to Belfast to review investigations. Sent to look at a case that the Police Service of Northern Ireland (PSNI) were unable to close within the requisite 28 days, she believes there is a serial killer on the loose and a man is targeting young professional women in the city. And so, the games begin.

Writer Alan Cubitt had been inspired, if that is the right word, by the case of the Blind, Torture, Kill (BTK) serial killer, Denis Radar. His intrigue was heightened partly due to the testimony of Radar and the evidence of his crimes. That Radar was the guilty man was obvious and so Cubitt made sure we knew that our serial killer, played by Dornan, was responsible for the killing and this removed the drama of wondering who was guilty.

Instead, he developed the chase of The Fall.

Who, became The Why?

The Belfast Strangler, Paul Spector, played by Jamie Dornan, is a family man, with a normal family around him. He prowls his victims and then takes out, over 13 episodes, six victims. Anderson smolders throughout and this tension heightens the drama. Whilst Spector will invade his victims’ homes and rearrange things within to psychologically upset their rhythm prior to striking, Gibson has to deal with a misogynistic apparatus that initially sees her as a meddler from London, and a woman to boot.

By the end of each episode, the threat to women is clear and what is always missing, is the solution, until the end…

Whilst there is a relationship building between our two principal characters, the teenage babysitter, Katie is key. She is obsessed by Spector and his cheerleader and defender, leading to her being abused by Spector mercilessly. The Fall asks us uncomfortable questions and does so by using camera angles and gazes from the photography which make us voyeurs and excited observers of what macabre event comes next. We are engaged in such a way that the line between being appalled at the crimes, admiring the skill behind them and wanting it never to end, ultimately that he shall not be caught and punished, asks of us very challenging opinions. It hit a mark – a highly dispiriting one.

And after three series, Anderson went off into the theatre, Dornan went on to stardom and the series came to an end. There is a plan for a fourth series and the character of Stella Gibson has plenty of legs to take us into the next stage of her career. It would need a nemesis of the engaging and macabre beauty of Spector, to maintain the tension.

And that, might be why we may never see it…

British television is a curious affair. Begun through the British Broadcasting Corporation (BBC) it is funded through the universal license fee. In essence, if you wanted to watch the television, you had to pay the license fee. The BBC got it all and is state run, albeit at arms-length. Then came along commercial television in the form of the Independent Television (ITV) in 1955. Designed to bring a bit of competition to the BBC, it was paid for through advertising but still free to air… well they didn’t add another license fee to it. By the time that I was born, 1965, there was BBC1, BBC2 and ITV. And that was it. It was still years before Bruce Springsteen would moan that there were 55 channels and nothing on but here in the UK, we kept this going until in 1982, we added a fourth channel and in 1997, a fifth. With sparkling imagination, they were called Channel Four and ehm Channel Five… In between came Sky and we understood what Springsteen meant. And so, my childhood and leading up to early adulthood we had three options… But the programs made were exceptionally good. And so, here is some critical nostalgia as the lockdown has brought a plethora of reruns, new formats and platforms and old classics trying to make their way back into our consciousness as broadcasters flood their schedules with classics… or are they classics at all? Let me take you through an armchair critics’ view of what we have to see, to find out… Welcome to the Lockdown Lowdown.