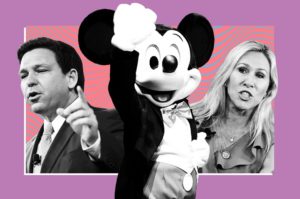 There was a time when a Disney vacation may have been an approved family plan for a Conservative. Oh, some of the more recent storylines of Disney and Marvel movies were becoming bothersome to them, but they found a way to ignore it as they believed Disney was pandering to the “woke” crowd. They would go forward with planning their Disney vacation packages. Now they’re seemingly through with Disney after this recent move of them speaking out against Republican Governor Ron DeSantis—after some initial hesitation, and against his bigoted Parental Rights Education (nicknamed “Don’t Say Gay”) bill. The focus has been on the supposed audacity of Disney, a past favored and approved family company, to involve themselves in going against a Republican they had cozied up to in the past for whatever corporate or financial gain they had their eyes on. In these Conservative opinions they state, how dare Disney speak out against these policies, and they should mind their business not politics.

Many Republican legislators have decided to revert into a non-democratic society, and they are trying to remain in power by playing up to the bigotry that has become a mainstay of their party. For most with a sense of right and wrong and who are concerned with human rights, they know young people would suffer from policies like this which cause social isolation, bullying, and violence. Most of us were waiting for a big influential, moneymaker in Florida like Disney to speak up and do the right thing. Disney knew they had park and executive employees, actors and actresses of their company who are a part of the LGBTQ+ community and needed to be supported. They had to have seen the recent trend of Republican led states like Alabama, Arizona, South Carolina, and Utah try passing similarly bigoted statutes. Fortunately, for many of these areas the courts were not in agreement with the bigotry.

It hasn’t stopped the extremist views and attempts at reversing civil rights though. So now they want to protest and boycott Disney. I must admit it makes a visit to Disney World appealing to me for the first time in some years, but I wrote months ago about how many Americans were openly sympathetic to white nationalist groups and sentiment nowadays. Note how the GOP has been quick to act upon populist and anti-immigration sentiment then embrace the white nationalist’s usual myths of Black criminality, scientific racism, misogyny, homophobia, and antisemitism. It all goes together in one package. These ideas used to stay more underground, but not anymore. Republicans continue to urge Conservative voters to boycott specific companies including Coca-Cola, Delta Air Lines, and Citigroup.

In fact, it was only a year ago that Trump said, “It is finally time for Republicans and Conservatives to fight back— we have more people than they do by far! Boycott Major League Baseball, Coca-Cola, Delta Airlines, JPMorgan Chase, Viacom CBS, Citigroup, Cisco, UPS and Merck. Don’t go back to their products until they relent. We can play a better game than them.” What was this in response to? Well, all of those companies he named had pushed back and spoken out against some voting legislation, like Georgia law SB 202 and other legislation proposed in states throughout the U.S., which would target Black voters and other voters of color. The words “woke” and “radical left Democrats” got thrown around by Trump’s supporters as they added these businesses to their growing list of boycotts. Now there is blood in the water for Disney.

They are emboldened by the cozy relationship we watched a sitting president have with those spreading violent ideologies, misinformation, and conspiracy theories until he had to be deplatformed from social media. That says it all. Now have you taken notice of the comfort with which these hateful groups march up to Disney’s property—right in front of families driving to the park’s gates, touting their beliefs on signs and showing up in public spaces with Nazi flags? Yes, you read that correctly. Footage of people waving Nazi flags outside an entrance to Disney World went viral on TikTok and other social media this week. I personally read about it in The Jerusalem Post. Many Disney World visitors expressed their outrage and criticism towards Florida Governor Ron DeSantis for not issuing any condemnation of the incident. We’re not surprised that he didn’t though. Think back to February, when DeSantis refused to condemn a Nazi rally in Orlando that took place over a weekend.

This is what the Conservatives, the GOP, the Republican party has emboldened in our country. The question is, are these isolated incidents or the continuation of a seismic shift? Another thing is clear in their political playbook: they’re targeting some of the most iconic American brands and labeling them as “woke” to trigger their base. Once they hear it, the base knows the drill and the rest of us have to deal with their nonsense afterwards. This violent, racist, and antisemitic atmosphere hijacked the political arena and is threatening all of our country. It has to be spoken out against, acted out against, and fought on every possible level. So let them go up against Disney, Starbucks, Coca Cola, Delta, Nike, and whomever else they claim to be boycotting this month. We need the highest levels of the business world to take more forceful stands on issues that matter to women, BIPOC members of communities, and LQBTQ+ individuals. Don’t let up, whatever you do, because we know what their playbook contains and how badly they want everyone to step aside as they bulldoze right over civil rights and set us all back by decades!