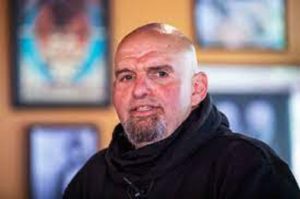 John Fetterman has climbed to the top of the political ranks for Pennsylvania’s upcoming primary for the Democratic Senate race. How he managed to connect with voters is simple; he’s rocked the shorts-and-hoodie look while insisting that he’s just “doing my thing.”

So who exactly is John Fetterman? He’s currently the lieutenant governor of PA, and likes to stay unique from every other mainstream politician. Standing at 6-foot-8, and in his standard shorts and hoodie uniform, Fetterman is a candidate who believes “voting is kinda critical to democracy,” also pledging to “get good Democratic stuff done.” He’s even referred to one of his potential Republican opponents as a “weirdo” (hint: he’s correct).

“I’m just a dude that shows up and just talks about what I believe in, you know?” he said in an interview with the New York Times. After this week, PA’s general election contenders will be chosen by voters and Fetterman’s standing will give a clearer view to how vividly personal branded politicians can do in such a highly divisive political climate.

While he had an unsuccessful run for Senate in 2016, Fetterman ultimately developed a following amongst liberal PA voters. The once mayor of Braddock, an old steel town that he revitalized during his tenure, ended up defeating the incumbent for lieutenant governor which has given him a visible statewide presence.

Here is some things you should know about PA’s upcoming election:

1. GOP voters seem to be rallying behind extremely far-right candidates, worrying both parties for what that means in November.
2. In the GOP Senate primary race, Kathy Barnette, who is a conservative commentator, has been making a last minute surge against her big-spender opponents, Dr. Mehmet Oz and David McCormick.
3. Rep. Connor Lamb was the initial Democratic Senate front-runner; however, it hasn’t worked out that way.
4. PA is a massive battleground state, especially regarding abortion, in this upcoming election cycle.

Per The NY Times report, “Mr. Fetterman is widely considered a progressive candidate who promotes issues like raising the minimum wage, legalizing marijuana and eliminating the filibuster, and fighting for voting rights, abortion rights and protections for L.G.B.T.Q. people.”

Pennsylvania’s primary election will be held this upcoming Tuesday on May 17th.