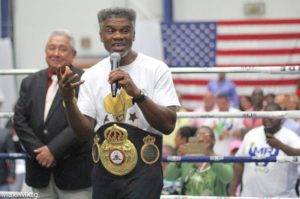 More of that later…

Born in 1960, in the U.S. Virgin Islands, Jackson competed at light middle and middleweight. Pound for pound there are still many who believe he is one of the hardest punchers ever to wear a glove. He was elected to the International Boxing Hall of Fame in 2009 thanks to a glittering career that began professionally in 1981 and finished in 1998.

Before he made it to the pro ranks, his amateur career saw an inglorious 17 fight record with 2 losses. He did make it to the 1979 Pan American Games but failed to get past the first round.
In an interview online with RingTV.com, Jackson was to ruminate about his power with great honesty. It was a God given power, according to him as he told them, “It’s something you are born with. I remember as an amateur and the first time I threw a punch was against a professional and I knocked him down. I was about 17 or 18 (years old). I caught him with a right hand. That was the first time I realized I had natural power. I always seemed to have that power punch in the bag. I felt the power and my coach said I don’t have to try to hit hard all I need to do is throw the punch because my natural ability would click in.

I realized that and I really found out I had that punching ability much more than a lot of amateurs I grew up with and trained with.”

And so, it appeared that the professional rank was where he was more naturally suited. On the 2nd of February in San Juan, he made his debut with a points win against Inocencio Carmona. On the 20th of June 1984, he won his first belt – the WBC continental Americas title with a stoppage of Ron Lee Warrior in San Juan, then he defended it four times – on the 15th of August 1984, in Las Vegas when he stopped Curtis Ramsay in the 12th round, on the 21st of November 1984, when he stopped Tim Harris in Las Vegas in the 8th, on the 12th of July 1985, in Santa Clara when he knocked out Rafael Corona in the 3rd, and on the 28th of February 1986 in Saint Thomas when he knocked out Lopez McGee in the 4th.

23rd of August and all this malarkey brought him to Miami Beach and a shot at Mike McCallum for the WBA light middleweight title. He climbed into the ring on the 23rd of August 1986, and it did not last beyond the 2nd round. Jackson, having started well, was overwhelmed and stopped in the 2nd.

On the 21st of November 1987, he faced the Korean Baek In-chul for the vacant WBA title, vacated by McCallum and won it in 3. Jackson went on to make 3 defenses of his title when he beat Buster Drayton with a 3rd round stoppage in Atlantic City, Francisco DeJesus in Las Vegas with an 8th round knockout and then beat Terry Norris with a 2nd round stoppage back in Atlantic City. Including the winning of the title he had been in world title fights that had not gone beyond the 8th round! His punch power was clear and world class.

It was after these wins that we in the UK got to hear about him. In 1990, Jackson vacated his belt and had Errol “Bomber” Graham in his sights for the vacant WBC middleweight title, as he believed he had nothing left to prove at light middle. Jackson had damaged his retina in his defenses and been out of action for a year. Due to this the British Boxing Board of Control refused to sanction the fight on British shores. The WBC needed a venue.

They went to Spain. The Torrequebrada Hotel & Casino, Benalmádena, Andalucía, Spain on 24 November 1990 to be precise.

According to British boxing correspondent, Steve Bunce in his Big Fat Short History of British Boxing, the Dominic Ingle trained fighter, Graham … “had no idea who Jackson was, but believed he was as blind as a fucking bat.”

For 3 rounds Graham schooled him and caused him some serious damage to his eye. Jackson’s eye was closing due to the targeting that Graham had managed to use in the first 3 rounds. At the end of the 3rd round both boxers were warned that, given the punishment being meted out to Jackson and the swelling of the eye, that the referee would stop the fight after the 4th round. Jackson took heed and caught Graham with that “lucky punch” which looked anything but lucky.

According to his RingTV.com interview, Jackson had an understandably different feeling about the events of that night, “Of all my knockouts that was one of the most historic. The fight was amazing. Herol was a very good fighter, fast as well; he was a big middleweight, and he was getting to me. I got caught early in the fight, I think my right eye was swollen, the ref said if I don’t do something he’s going to stop the fight. I switched (stances) so I could see him with my left eye and I literally threw the right hook since I switched to southpaw and he came straight in figuring he got me and I realized the punch was there, he was open. He came in for the kill and that’s when I was able to get off my right hook and caught him flush on the chin.”
Graham was asleep before he hit the canvass, made one hell of a thud and was out cold for five minutes. He then fainted on the way to the dressing room before ending up in hospital for a night.

Then in 1993, came the first fight with Gerald McClennan on Las Vegas evening alongside Lennox Lewis and Julio Cesar Chavez. On the 8th of May, the fight was stopped in the 5th round but this time it was Jackson who was halted – McClellan was the new WBC champion.

It took a full year before the rematch, during which Jackson had kept busy. This time the fight, which was hugely explosive, lasted only 83 seconds. The result? Same victor as the first time.
It took McCallum vacating the title to allow Jackson to reclaim it by beating undefeated Agostino Cardamone in March 1995 with a 2nd round stoppage in Worcester.

It was a short reign because in August 1995, at the MGM Grand, Las Vegas against Quincy Taylor, Jackson, was stopped in the 6th round.

He was to fight again for a “World” title when in Tunica, on the 23rd of January 1993 he was knocked out in the 9th round by Verno Phillips with the WBU light middleweight title on the table. 4 months later he fought professionally for the last time in Auburn Hills when he was stopped in the 8th by Anthony Jones. Father Time had finally caught up!

Jackson went on to train and coach back in the U.S. Virgin Islands. He has three sons who boxed professionally – Julius, Julian Jr and John. It seems to suit him well as he told RingTV.com “I enjoy my retirement because I love my country, my family and my new career as a coach.” And given his primary role in the ministry, all I can add is amen to that!