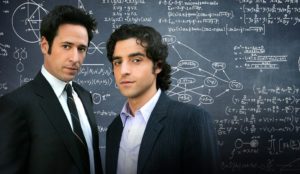 Opening: (Voice-over by David Krumholtz) We all use math every day. To predict weather, to tell time, to handle money. Math is more than formulas and equations. It’s logic; it’s rationality. It’s using your mind to solve the biggest mysteries we know.

I am sure that Judd Hirsch has been in a bad television show. I am equally sure that I have not yet found it! For 6 seasons and 118 shows he was the patriarch of a family who solved crimes. Brothers Don and Charlie, played by Rob Morrow and David Krumholtz it was a show that I instantly loved until the bizarre turn which foreshadowed its end.

The premise was quite simple. Maths.

The CBS broadcast show, which I think we got on Channel Five, before it made a splash on Sky, saw FBI agent Don Eppes, played by Rob Morrow, enlist his mathematics professor brother, Charlie, played by David Krumholtz, to help solve tricky crimes. Judd Hirsch played dad, Alan.

It was a simple and functional crime procedural. A crime was discovered, the team could not get their heads round it, in was called Charlie and he modeled the solution. In a genius manner he solved it, and all were very happy.

For most of the run, despite the brotherly rivalry and the familial context this Ridley and Tony Scott produced drama knew what it was. It was a cozy whodunit wrapped into 40 plus minutes. There was comfort in the premise which attracted you to the series being a consistent part of your pleasure.

There was a complete cast of interlinking characters which stretched between law enforcement – the Los Angeles FBI field office – and scientists – from the fictional Californian Institute of Science.

At the FBI we had several characters in and out but a mainstay in David Sinclair, played by Alimi Ballard, backed by Megan Reeves, played by Diane Farr, from season 2, Colby Graner played by Dylan Bruno, Don’s former love interest, Liz Warner played by Aya Sumika and in the final two series, Nikki Betancourt played by Sophina Brown.

The scientists were Professor Larry Fleindhardt played by the excellent Peter MacNicol, and Professor Amita Ramanujan – Charlie’s love interest – played by Navi Rawat. Incidental characters got nods to famous mathematicians in their names in what was an in joke that frankly passed me by!

The show began tentatively with a first season of only 13 episodes. There was a bit of a shake up afterwards with some new characters arriving. There came some back story involving relationships and central to it all, the (his) story of dad and Charlie and Don’s mother. Larry became a nomad, gets into a relationship with Megan and Amita then thinks she might leave and go to Harvard. It all worked and the richness of some of the detail fleshed people out a lot better.

Season 3 continued some of the narrative arcs established in 2 but there were some radical changes. Larry was off to the space station, returning very disillusioned, a pregnant Diane Farr has less presence and Colby is exposed as a Chinese operative. It began to get a bit weird.

Season 4 had to deal with the writer’s strike, and it meant only 12 episodes were scheduled before the end of the strike and a further 6 got added. We discovered Colby was not a double agent but a triple agent! Don’s issues which were appearing in season 2, got a tad worse, Charlie and he have a falling out and Charlie ends up sending information off to Pakistan and getting his clearance for work with the FBI revoked. There is trouble in paradise.

Season 5 for me, became slightly more problematical. If the idea of a triple agent, losing security clearance alongside that AND solving crime was not bad enough, this Jewish crimefighting family, had Don rediscover his religion. To be fair, I was not overly bothered by this narrative path; I just felt it was a little apologetic in its treatment. Don becomes secretive and rather than allowing a full-on debate about the nature of the religion, it became an adjunct to the story. It deserved better. Amira also gets kidnapped, forcing Charlie to propose. Her response left us hanging and was the season finale cliffhanger.

Then the final season arrived and they all got to plan their leaving. Don takes up an admin post within the FBI, Charlie is off to the University of Cambridge with new wife Amita, and Alan, having lost a fortune becomes a software consultant – quite a twist when the actor is 75! Larry continued to provide the weird bit.

And so, it ended with most of the narratives folded into a finale which resolved itself.

Charlie to the University of Cambridge – absolutely… Action man Don becoming a desk jockey? Alan taking on IT? I was less than convinced, however the fact they got to end it properly all was refreshing. Rather than the reshoot a sequence which might, but does not, explain what has happened like in Castle we got real send offs.

And yet I have a tremendous fondness for it all. Perhaps this is due to the innovative nature of it, my lack of mathematical ability and the intriguing way it kept to crime more than drama, but overall, I was sorry to see the end. And yet – though I found the way it ended good, I wanted something more in keeping with my own narrative expectations.