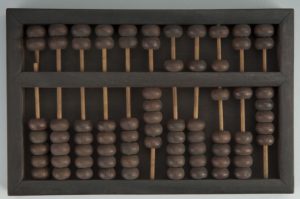 My IPhone has a cute little computer. (Since the thing is seated right here atop my desk, I am obligated to be complimentary)

And my computer affords me access to a plethora of ways in which to make calculations.

In a previous column, I wrote a panegyric to my old slide rule.

But now the time has come to honor another calculating device.

It originally came from the Greek word, abax, which means table.

And the Greek word may have been derived from a Semitic word, abq, which means sand.

I recall the time when we couldn’t count further than ten, because the only method of keeping tallies was by using our fingers and toes.

My delight knew no bounds when in 2700 BC, the Sumerians developed the abacus. It was a delicious counting board that I could just carry around with me. But I stopped doing that, because it was a stone tablet and became too heavy.

I was happier in 1200 CE when the Chinese developed the suanpan (Which means counting tray) I remember it well. It looked similar to my own modern abacus and was so much lighter than the Sumerian stone calculator.

When in college at the University of Chicago, I proudly carted around the slide rule my boyfriend gifted me with.

More years passed and I returned to the abacus. I became adept at adding and subtracting. My fingers flew around the tablet, rapturously moving the beads.

Then I entered medical school and my abacus languished as I acquired a small Texas Instrument’s calculator. For a few years, we got along well…until my first computer reared its head.

But the abacus remains as an icon of beauty, convenience and accuracy.

I recall an anecdote about the brilliant physicist Richard Feynman. And I quote from Wikipedia:

Feynman vs the abacus

Physicist Richard Feynman was noted for facility in mathematical calculations. He wrote about an encounter in Brazil with a Japanese abacus expert, who challenged him to speed contests between Feynman’s pen and paper, and the abacus. The abacus was much faster for addition, somewhat faster for multiplication, but Feynman was faster at division. When the abacus was used for a really difficult challenge, i.e. cube roots, Feynman won easily. However, the number chosen at random was close to a number Feynman happened to know was an exact cube, allowing him to use approximate methods.[51]

Indeed, this old Luddite does truly possess an abacus. Although no longer used, because over the years, my abacus skills have lapsed into disuse, it occupies a place of honor on my bookshelf.

And once a decade, it is even dusted!