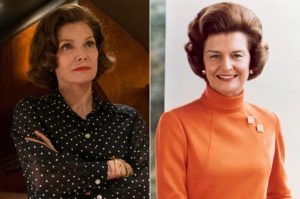 On April 15, 2022, Showtime debuted the much talked about and highly anticipated limited series THE FIRST LADY. Season one of the ten-episode series follows the personal and public lives of former first ladies Michelle Obama, Eleanor Roosevelt and Betty Ford, before and during their time in the White House. Obama is portrayed by Oscar winner Viola Davis, Roosevelt is portrayed by Emmy winner Gillian Anderson, and Ford is portrayed by Golden Globe winner Michelle Pfeiffer.

When I first heard that Pfeiffer was attached to star as Betty Ford, I was of course ecstatic to learn she was involved in a new project. It was wonderful to see her embody such an important and iconic figure in American history. With all due respect, Davis and Anderson are very good in their respective roles, but it’s Pfeiffer, who owns this series, proving again that she is a force to be reckoned with. For her portrayal, Pfeiffer has seamlessly transformed into Betty Ford, giving an honest and heartfelt depiction, while capturing the many facets of her life; from adjusting into her role as the First Lady, to coping with her alcohol and substance abuse to her diagnosis and battle with breast cancer. And those are just a chunk of the many things that Ford is known and remembered for. Pfeiffer’s nuanced performance has been the constant highlight of the series. For an added bonus, THE FIRST LADY reunites Pfeiffer with her former I AM SAM co-star Dakota Fanning. Fanning plays Susan Ford, the only daughter of Betty and Gerald Ford (played by Aaron Eckhart). The actresses shared a strong bond while filming I AM SAM, and watching them together again 20 years later, its evident that their bond is even stronger.

Michelle Pfeiffer always understands the assignment, and this latest role backs that statement up. She continues to receive rave reviews and countless accolades. It will be an injustice if she wasn’t awarded an Emmy and/or a Golden Globe for her amazing work.

THE FIRST LADY is streaming now on Showtime, with new episodes airing on Sundays.