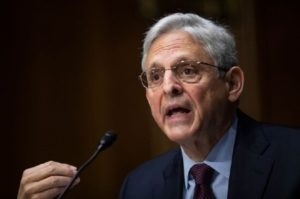 Vroom, Vroom!!!! Looks like this DOJ car is finally moving in my direction. The DOJ is letting us know that they are looking deeper into what Trump did on January 6th. Chief of the Justice Department’s Criminal Division, Kenneth Polite along with U.S. Attorney for Washington, D.C., Mathew Graves sent the January 6th committee a letter asking for the transcripts of some of the interviews. I want to point out the obvious; it’s the Chief of the Criminal division, which signals to us that have been impatiently waiting, and to some patiently waiting, to hear that they are investigating Trump for a crime.

Liz Cheney has been hinting at charges of obstructing Congress, which is a felony charge. It is very possible that the DOJ will expand the charges to conspiracy to overturn the election. It is also a federal crime. I would also not be surprised if there are more charges they have at their disposal.

I suspect that Trump is not the only one being looked at. Mark Meadows and Lindsey Graham are two that interest me. Graham would be included because of his phone call to Raffensperger in an attempt to push him to make Trump the winner. The list of how many people could be caught up in trying to help Trump overturn the election is very long. Trump being who he is made sure that the people defending him did so in public ways. Most of these people were lawmakers and government officials who knew what they were doing was wrong.

I know that there will not be an indictment on Trump tomorrow; although, I won’t be mad if they proved me wrong on that. It will still go slowly because this case is breaking all kinds of records and precedents. There is nothing to compare it to, so they have to define it in a way that can not be wriggled out of. All of Trump’s life he has found a way to get out of legal trouble. They need their fine-tooth comb to make sure this Don won’t be Teflon. They also want us to know where they are headed. I’ll say it again because it makes me smile. That’s to the criminal division of the DOJ.

I can only imagine Trump will be acting out in some way when he hears this news because he is in no position to control it. He silenced Mark Meadows from going in to talk to the January 6th committee with a million dollars to his non-profit from the Trump’s Save America PAC; according to campaign finance records. I don’t know if the same tactic will keep Meadows from talking to the DOJ. Meadows may find his singing voice when real jail time is put on the line.

Trump is in trouble and I don’t see Biden pardoning him if he goes to jail. If things go as I hope and Trump is indicted before 2024, I can see all Republicans running on pardoning him. But that’s a long way off. For now, we can be excited that the DOJ is making moves to look into him. We know they don’t do it lightly.