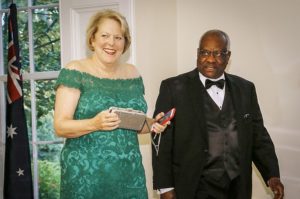 In yet again what is another blatant attempt to overthrow the results of the 2020 election, it is has been revealed that Ginni Thomas — wife of the SCOTUS Justice Clarence Thomas — attempted to get Arizona state lawmakers to throw out the electoral votes for President Joe Biden to help reverse Donald Trump’s loss.

Virginia “Ginni” Thomas is no stranger to planning and trying to carry out an insurrection against the U.S. government, but my lord did she live quite a trail of details. While News broke this week that the Jan. 6th Committee has acquired Mrs. Thomas’s phone records, it’s her emails that have drawn the most scrutiny. In her correspondence with Arizona GOP lawmakers, Ginni asked for them to do away with Pres. Joe Biden’s popular vote victory and choose a “clean slate of Electors,” according to the Washington Post’s report.

Thomas emphasizes in her emails, sent conveniently days after Trump’s loss, that legislators must intervene due to the large-scale fraud that she provided a plethora of erroneous evidence as proof. It’s important to note that Ginni Thomas did not mention either candidate by name; however, it’s not really hard to figure out who she is referring to considering he’s still holding rallies for his temper tantrums almost two years later.

She took it upon herself to continue the facade even after the races in all 50 states had been called and Biden announced as the winner. Thomas proceeded to keep pushing legislators to “stand strong in the face of political and media pressure.” Even going as far as telling the lawmakers that it was their responsibility to choose new electors, emphasizing “yours and yours alone” and said they had “power to fight back against fraud.”

“Article II of the United States Constitution gives you an awesome responsibility: to choose our state’s Electors,” read the Nov. 9 email from Thomas. “… [P]lease take action to ensure that a clean slate of Electors is chosen.” Later dated emails encouraged swing state lawmakers to “put things right” and “not give in to cowardice.” The alleged emails center to the scandalous revelations were sent using an online platform designing tool that allows you to send emails in a template to multiple recipients, in this case elected officials.

Adding more fuel to the fire, Justice Clarence Thomas has still refused to recuse himself from all cases related to January 6th despite the massive outcry calling for his recusal or resignation. Don’t expect one either considering the Thomas’s have been pulling this type of shenanigans (although never to this level of blatant corruption.) For now, it seems like Clarence and Ginni Thomas have a little more time to try and sabotage the country before the midterms this November.