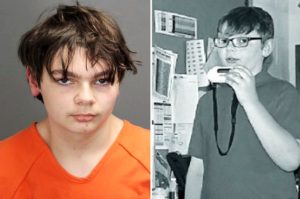 I think we all remember the story of Ethan Crumbley and his parents, James and Jennifer Crumbley. But just in case I will remind you of who they are. Fifteen-year-old Ethan Crumbley killed four students at his school. He brought a gun to school that he bragged his dad had gotten for him. The Prosecutor, Karen McDonald, decided the son should not shoulder the blame alone. She arrested the parents on involuntary manslaughter.

What gets me about that case is that the mom told the son she was not mad at him for what he did, bringing the gun to school, but disappointed that he got caught. This seems to be the mindset of the ‘right to bear arms’ people. They don’t see the wrong in children bullying people with weapons.

Recently in Forney, Texas; a little nine-year-old white boy came to the house of the Nash family, a black family, with a whip in his hand using it to beat on the door. He was there to attack their nine-year-old daughter. The mother, Carissa Nash, told him firmly to get away from her door or she was calling the police. The boy said okay, and left the view of the camera where they say he damaged their car and then went home. They called the police anyway to report the incident and the police told them they could do nothing because he was nine years old. They told them it was a civil matter and they needed to contact the parents of the boy. They then went to the house where the boy lived and the father, Bryan Thomas Brunson, came out with a gun. He defended what his kid did instead of trying to get to the bottom of the issues at hand. At some point the gun accidentally went off. If you have seen the video, you may have seen that his daughter was standing behind him. He came close to shooting his own daughter with his foolishness of trying to intimidate the other parents. He was arrested May 12th on a class A misdemeanor of deadly conduct.

These are two different types of stories. One kid actually killed people while another took a whip to beat another child. When faced with knowledge that their kid did something bad they did nothing to reprimand the kid. The Crumbley kid had a weapon only a parent could give him access to. The Brunson child had a whip that I am sure could not have been a part of his toy collection. I can only imagine why the parents had a whip at their home, and I am also curious to know did that dad provide the son with the whip and tell him to go get the girl? I may never know the answer to that but I do know neither parent took any responsibility for what their children did. One incident led to deaths.

I can not say that all kids who grow up in homes with guns will become domestic terrorists. I do notice that there are a lot of young people out here killing with guns. This behavior is learned. The right defends guns above lives. When someone is killed, they offer thoughts and prayers and then say it’s too soon to talk about gun control.

Back in the day when drugs were a problem, they did not offer thoughts and prayers. They locked people up for crazy amounts of time; mostly black people. I think it is time for some outrageous sentences to happen for the ‘right to bear arms’ people. We cannot let these kids that they are raising become little terrorist. I can not tell you a solution because as of now Republicans have to sign off on it and they run, and win, their campaigns because they protect the guns and ignore the lives.