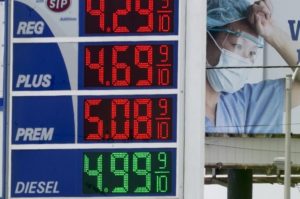 On Thursday the U.S. House passed legislation regarding prevention of gasoline price gouging with a 217-207 vote. Not a single Republican voted in favor of the bill despite what their daily Fox News and Newsmax. The bill is being sponsored by two Democratic House members, Rep. Kim Schrier (WA) and Rep. Katie Porter (CA).

The proposed bill would prevent the selling of gasoline at excessive prices during an “energy emergency.” Rep. Schrier stated, “At a time when people in my district and across the country are feeling the pain of high prices at the gas pump, Congress needs to be doing all we can to bring down costs.”

Back in ‘never gonna help you land’ Republican Whip Steve Scalise wrote to his fellow caucus members “attempt by the Majority to distract and shift blame” for high gas prices. Scalise wrote that there was no evidence of gas price gouging.” Don’t worry though, 192 Republicans also voted against the emergency baby formula shortage bill. That got passed by Democrats with the help of a handful of Republicans like Liz Cheney.

But I bet you $10 at some point within the next 24 hours that Tucker Carlson, Laura Ingraham, or Sean Hannity have a GOP House member on screaming about Biden’s gas crisis and baby formula shortage.