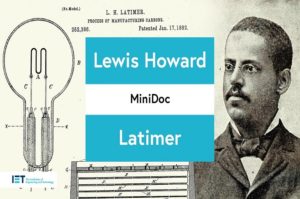 That is the patent number and date on which Lewis Howard Latimer received his approval for the “Process of Manufacturing Carbons”; actually for his design of a more durable and longer lasting carbon filament for electric light bulbs.

Before electric light bulbs, there were candles. For me, candles are romantic. But back in the day, it seemed too easy to reach for that box of chocolates, while reading your favorite novel….and ooops! The candle on the end table tipped over onto the rug, burning a nice hole.

Ah, but then we had gas lighting. Quite an improvement. Home gas lights came along in the early 1800s; but they had to be lit every morning and in the evening, they had to be manually extinguished. And gas street lights had their difficulties also.

From Mcgill University’s newsletter for the Office of Science and Society:

“However much of an improvement gas lights were to candles, they weren’t necessarily low-maintenance – the lamps had to be manually lit every night and extinguished every morning. Even worse, there were harmful side effects, as carbon monoxide, a lethal gas, was a byproduct of the combustion reaction.”

Edison’s light bulb was made possible due to the brilliance of the son of former slaves: Lewis Howard Latimer.

Latimer was self-taught and by the age of eighteen, had become the head draftsman in a patent firm.
He then worked with Alexander Graham Bell, drawing the blueprints for Bell’s telephone invention.

In 1880, his accomplishments became known to Thomas Edison who hired him for his technical knowledge and his skill as a draftsman. At that time, electric lights were not durable and they weren’t practical enough to be used in the home. They were also too expensive for home use.

Involved with so much technical creative work, he still found time to play the flute, write plays and poetry and volunteer at the Henry Street Settlement in New York City. It was at this settlement that he taught English and mechanical drawing to immigrants.

This man who had no formal scientific invention was invited to become a member of the Edison Pioneers. He was the only Black member of this distinguished group. Membership was the highest honor that was bestowed upon those who had made significant contributions to the field of electricity

“The Edison Pioneers was an organization composed of former employees of Thomas Edison who had worked with the inventor in his early years. Membership was limited to people who had worked closely with Edison before 1885.[“1]

Born to fugitive slaves, this noted Black inventor was a patriot. He lied about his age and enlisted in the U.S. Navy at the age of fifteen. He was proud to have served on the USS Massasoit until the Civil War ended.

So, when you flip that switch or clap your hands…and you have light…please remember Lewis Howard Latimer who played a great role in making that happen