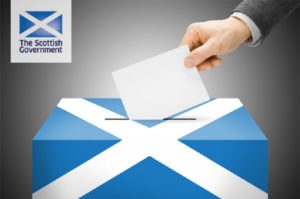 Elections are taught and fraught affairs. Many, many years ago when there was widespread electoral fraud in Northern Ireland, and people went with their neighbors’ and friends’ identification to vote as well as their own, the mantra was, vote early, vote often…

But where there is no fraud, there are many who believe it exists and are willing to claim a win when they are close, but the cigar is not theirs…

Here we go again. Straight out of the Trump handbook. Declare your win. Forget the facts. Make it seem like you have won an election by declaring things to be so and then the followers who will follow, no matter what the truth may be shall continue to thrust forward the lie.

People will believe the lie.

People may even be prepared to go to jail for your lies.

Tragically, some people are willing to kill or be killed for your lie.

But it matters not a jot to you. You have a crusade to ride into the sunset upon. You have the “right” to bear the truth on your shield and pierce lies with your sword of “honesty”. Dae ye? Aye?

And then the lights come on and we all see the reality. Not just the truth but the reality.

The reality of ordinary folks, sickened by years of being ignored who had a new champion. Someone they believed spoke up for them. They talked of how this new person, spoke what they think but are too afraid to say it out loud. They did not contemplate why they should never say it out loud at all. They just believe they have the right. They believe it cos they was told it, by the man who spoke out loud the things that should have been left unsaid.

But simple though that thought may be it is a simple yet real grievance. They have been ignored. There are urban poor white folks and white peoples in the farms and on the ranches who have not had the representation that they wanted because they believed the world had left them behind. Rather than engage with them and explain why the world moved from their image of perfection to the place where it is better, they got left out the conversation. Often, for good reason. Sometimes because it was too much effort.

And they found a guy who thought the unthinkable, said the unsayable and became an unpopular populist. He won elections.

If you can believe that…

He cannot and does not.

And so, whilst attempting to win the Republican nomination in the Pennsylvania Republican State primary, Donald J. Trump told Dr. Mehmet Oz to declare victory despite all of the votes not yet having been counted. That’s because the votes, apparently, left to count are the postal ones. Trump does not like postal votes and believes they get used to make the result the one that his enemies want and not what the people want.

In short, he shouts corruption.

And there are people who believe him. After all, they claim, what is in it for him? Well aside from power, what is there? And aside from influence, what could possibly motivate him? Or prestige, or the glory, or heaven forfend, another tilt at the presidency…

Aside from all that, there is nothing that motivates him…Is there?

Over here I cannot see if Dr. Oz has used the play, but its legitimacy being reported is, in and of itself a worry. America needs to realize that it has many citizens who are unhappy and need to be challenged, educated, and brought back into the democratic fold. If not, the generation who hold grievances that are deep and racist, then their children and the young not yet corrupted by the lies and stories that keep the White Right, shall perpetuate the myths. It is too easy to dismiss them. They often dismiss themselves. It is their thinking and belief structures that need ridiculed and not them.

Democracy demands inclusion. There are unscrupulous people who will abuse trust and exploit fears. There is a real need to be vigilant on behalf of those who cannot manage to work out when they are the target of such nonsense.

And every time one of them who get into power make a claim about themselves – shout it from the rooftops – Did ye, aye…?

Did ye, aye? A very common and important phrase among Scottish lingo, word for word translates as “did you, yes?”. “Did ye aye” is an extremely condescending phrase used to shut down the person you’re talking to if you think they’re speaking rubbish. Can be used to convey that you think someone’s telling lies, being a fanny, being pretentious or simply to tell someone to go away. A very useful and versatile phrase.

Please note that the accompanying video is from an outside source and may contain language which is unsuitable for young ears.