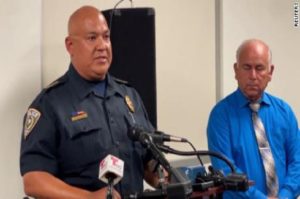 Reports of what happened during last week’s Uvalde school shooting are starting to shine a very dark light on what actually occurred amongst the response of law enforcement officers which left 19 dead.

Uvalde Police Chief Peter Arredondo, the chief of police for Uvalde’s Consolidated Independent School District, was the one who reportedly made the decision to not send officers into Robb Elementary School to confront the gunman during the deadly attack. Arredondo was elected to the city council on the May 7th election, just three weeks prior, after running his campaign on a platform of community outreach and communication. He stopped at least 19 officers from breaking into the school for at least an hour while the gunman opened fire on students and teachers.

Reports state that Arredondo was under the impression that the shooter had barricaded himself, and that no children were under an active threat at the time. Steven McCraw, the director of the Texas Department of Public Safety, stated that, “From the benefit of hindsight where I’m sitting now, of course, it was not the right decision. It was a wrong decision. Period. There was no excuse for that,” he said during a news conference. “There were plenty of officers to do what needed to be done, with one exception, is that the incident commander inside believed he needed more equipment and more officers to do a tactical breach at that time.”

According to McCraw’s statement, the chief instead sent officers to find keys for the school rather than send them in. So basically, while law enforcement officers threatened to use tasers and handcuff parents who were frantically trying to storm the school while looking for keys, the gunman was able to continue access and commit the atrocious attack which resulted in the death of 19 people, including two teachers who were protecting their students.

Arredondo is supposed to be sworn into the city council position on Tuesday, exactly a week after the horrendous attack. He was not present at Friday’s news conference and McCraw did not explicitly name him either.

Furthermore, Texas lawmakers have been torn in their response to the tragedy. Democrats have called for immediate gun reforms while Republicans continued their support for the NRA which held its annual conference meeting on Friday in Houston. Both Sen. John Cornyn and Gov. Greg Abbott pulled out of speaking at it. Sen. Ted Cruz continued promoting arming teachers and saying schools should only have one door as his solution to the problem as bad guys aren’t going to follow the law anyways.

Basically, Republicans have shown that their NRA donations are more important than the lives of children. From their perspective, it’s not a gun problem but a mental health issue and we need less doors. Gov. Greg Abbott stated that Texas must improve its mental health system. Ironically, in April he passed a bill that defunded over $200 million dollars from the state department in charge of mental health services.

In the wake of the nation’s latest tragedy, Republicans have shown their true colors. They aren’t pro-life as they don’t care about the kids who went to school with a heartbeat and left in a body bag. They also seem to ignore the fact that law enforcement officers stood outside with AR-15’s and were afraid to be shot instead of protecting the community they serve. If our own law enforcement is afraid of members of the public with assault rifles, then it’s time to implement gun reforms and ban them.