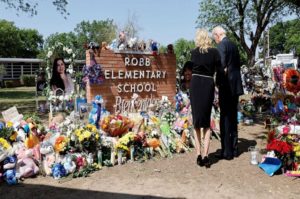 On Sunday President Joe Biden and First Lady Jill Biden spent time in Uvalde, Texas, to grieve with the community after the tragic shooting that occurred at Robb Elementary on Tuesday where 19 children and two teachers were slaughtered in the worst school shooting in the country since Sandy Hook.

In an extremely emotional visit, the Bidens visited started out the day by visiting the memorial site outside of the school to pay their respects to the victims. Accompanying the first couple was Gov. Greg Abbott, Robb Elementary’s Principal Mandy Gutierrez, and the school district’s Superintendent Dr. Hal Harrell. First Lady Jill Biden was photographed touching the pictures of the victims on display at the memorial site which is filled with flowers and white crosses for each victim.

Following the memorial site visit, the first couple attended mass at Sacred Heart Catholic Church where hundreds gathered. The president was seen walking towards a crowd that chanted “do something” at him to which Biden replied, “We will.”

Afterwards, the Bidens spent time visiting survivors and the families of the victims and first responders, per the White House. This is the second trip within the last two weeks the president has taken in the wake of a mass shooting to comfort the grief-stricken communities of Uvalde and Buffalo, NY. In his speech at the University of Delaware’s commencement, Biden spoke to the graduating class of his alma mater about both tragedies.

“Too much violence. Too much fear. Too much grief,” the president said. “Let’s be clear: Evil came to that elementary school classroom in Texas, to that grocery store in New York, to far too many places where innocents have died.” His call to all Americans to help make this country safer comes at a time where the divide seems to grow deeper as congressional and state leaders for both parties seem to be at odds at how to fix the problem.

While the country grieves the loss of the ten victims in Buffalo and 21 victims in Uvalde, calls for gun reform is at an all time high with 90 percent of Americans supporting some form of regulation to be immediately implemented in hopes of avoiding another devastating massacre. The NRA’s annual meeting held in Houston on Friday was greeted by hundreds of protesters who demanded change before more lives are senselessly lost.

If one thing has been made clear after the two shootings, it’s that the NRA of 2013 is not the same NRA of 2022. Hopefully the organization’s grip among the country’s top leaders and party is slowly becoming duller, and some sort of resolution can be made to ensure Americans don’t endure another painful, yet preventable, atrocity like we have in the last two weeks.