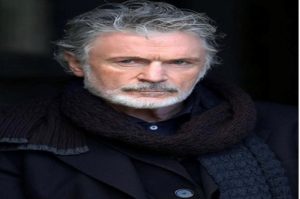 Irish actor Patrick Bergin is known for his roles in “Sleeping With The Enemy” and “Robin Hood”. Not many people know that his first love is music. He released a charity single with all proceeds going to Ukraine: Patrick’s version of the Leonard Cohen’s song “Anthem”. Check it out on YouTube. It is stunning.

KB: You are born in Dublin?

I was born in Dublin, and I was raised for a few years in a town called Carlow. The family moved up to Dublin. My father was a senator at the Irish Parliament. We lived underneath the Labour party offices in Earlsfort Terrace. We then moved to another part of Dublin called Drimnagh until I was about 17 and hit the road and the high seas for London. I studied to be a teacher. I have a Bachelor of Education Degree and I taught. I set up a school in England for children that wouldn’t go to school. I ran and opened an experimental theatre and we performed in the basement of a restaurant in West Hampstead and sometimes on the tube.

Very avantgarde. It took me a little while to become an actor. My music helped me get there. I was a busker in Amsterdam in the Kalverstraat and on the cheese market. I was singing a Jim Reeves song “He’ll Have To Go”. One day the security guard came and told me to leave. The girls at the cheese market said “No we want him to stay” so I was allowed to stay. I used to play up in Norway as well. My contracts in Norway were Standard Equity Contracts. It was essential to have 30 months of contracts before you were allowed to have an equity card which allowed you to get a job in the business as an actor. I got that and I got a job at The Channel Theatre Company and toured all through England, visited various places performing Harold Pinter’s play “The Birthday Party” and that got me enough qualifications to apply for acting jobs. I got an agent and headed off.

KB: What was your big break in movies?

I did a few smaller films and tv work but my first big break was in a movie called “Mountains Of The Moon” and that was produced and directed by Bob Rafelson who was responsible for Jack Nicholson’s career: He did The King Of Marvin Gardens, Five Easy Pieces, and a few other things with him. He produced Easy Rider. He came to London, and he was looking for somebody to play a character called Sir Richard Burton who tried to discover the source of The Nile. He was a big literary figure in the nineteenth century. I got to meet Bob Rafelson and auditioned for the role, and I got the job. It was shown in New York at the premiere. The owner of 20th Century Fox, Joe Roth, was there and he asked the girls if they thought I was sexy, and they said yes. I was invited to LA to read for the part, talked to the producers and director and I got all dolled up. At the end of the interview, they said “Thank you. We will be in touch”. I got up and walked into the broom closet by mistake. It was my reaction coming out of there that made the director later tell me that that was the moment I got part. This was “Sleeping With The Enemy” with the wonderful Julia Roberts.

KB: How did you manage to create this really nasty character?

I was practicing all my life (laughing). There were a couple films I based it on. There was a film by Alfred Hitchcock called “Psycho” and Anthony Perkins was in that. I really like that film. And there was another film which very few people know. It is called “The Fiend Who Walked The West”. There was an actor called Robert Evans. That was his last acting job on screen before he became a huge producer at Paramount Pictures. I thought he was absolutely fantastic in that movie. That is what I based my character on. A cross between Robert Evans and Anthony Perkins.

KB: and then you slapped Julia Roberts around in that movie?

Yes …I was playing a controlling and abusive husband. The bad guy. So much so that Joe Ruben, the director, told me later that if I was not hated enough when they did the testing of the movie, they had enough money for a reshoot and have me come back and smother the mother. The scenes were very tricky to shoot. Julia was very brave. It was great working with Julia. A wonderful woman. Very brave and courageous. I remember once we were all in a pub in North Carolina and the staff was giving a gentleman of color some problems and she got us all to walk out.

KB: Good for her!

Yes. Good for her.

KB: After that you did Robin Hood?

Yes, with the wonderful Uma Thurman. She was great. Robin Hood is a great story. A wonderful romantic story. Robin robbing the rich to give to the poor. I loved doing the film. I asked Uma Thurman to run away with me, but she said “No, Gary will follow us and kill us both”

KB: You have your own band called Patrick Bergin and The Spirit Merchants?

We don’t play as often as we would like to because of Covid. I had a single out just recently in aid of a charity program. All proceeds will be going to Ukraine. It is my copy of the Leonard Cohen’s song “Anthem”. Check it out on YouTube.

KB: How did you come up with the name The Spirit Merchants?

I remember a story about people who were selling souls. It is all about buying and selling souls. You are judging people, bargaining your souls. There is a bit of mysticism attached to it.

KB: In 2018 you sang for Pope Francis when he came to Ireland.

I sang the same song that was now released as a single. It was a wonderful experience. I didn’t get to meet him. but he waived at me, so I took my hat off. I think he is cool. He is doing his best.

I believe in the Mass. I believe in people coming together. Unite their spirits and to praise The Lord.

KB: People should do that more often.

I think so yes. I do a thing called St. Patrick’s Prayer or breastplate which I like to promote. If you do the words that are in the breastplate in a physical way, it is almost like a yoga. An exercise. When St. Patrick was introducing the Pagan King to Christianity, he was introducing them to the holy spirit. He stood in front of the Pagan King and he got the king to follow him doing the words: “Spirit before you” and he stretched out his hands t, “Spirit behind you” and he stretches his hands behind, “Spirit above you, Spirit on your right, Spirit on your left, Spirit within you, Spirit below you, Spirit when you kneel, Spirit when you sit and Spirit where you lie and Spirit where you arise. I arise today through a mighty Spirit. the invocation of the trinity through believe in the Threeness through confession of the oneness of creation. In the name of The Father, Son, and Holy Spirit.

KB: In 1993 you bought a church in Tipperary and turned it into a poetry centre. Does that still exist?

I sold it last year. I ran some poetry competitions and had poetry readings there. I never got to use it as much as I would have liked to have done. It was dedicated to the first Irish poet Amergin which happens to be my name in Irish Gaelic. In Gaelic my name is Padraic O’Amergin. It was he who chose the goddess Eire as the name of the country. Look for the book by Robert Graves. It is called “The White Goddess”. If you read it, he explains the poem about Amergin. My ancestor as I like to say. It explains the whole genesis of European poetry. Poetry is very important.

KB: Do you have any new movies coming out?

I just finished two or three pieces in recent months. I did a prequel to the John Wick series called “The Continental” shot in Hungary. I shot a film called “Nutcracker” in which I play a character who makes nutcrackers who are killing people. We are hoping to do a film called “Cold Sun” in late July which will be shot in Malta. My partner Helen Goldin and I are hoping to do either a series, documentary maybe even a film about history about her grandmother Lady Catherine Moore and we are also hoping to do a documentary about my own father. They are putting up a bench at the river in Carlow in memory of him. He helped raise the living standards in the town. The inscription on the bench will be his simple philosophy about what people need. Three things: roof over their head, food on the table and a flower in the vase. Pretty simple and wise.

KB: If you live by that, nothing can go wrong

Exactly. The flower in the vase represents both your spiritual and your aesthetic life.

KB: If somebody would offer you a film role, the lead, and you could pick the cast like four people, any actors, or actresses you would like to work with?

KB: If you could pick a director for that movie?

KB: What would the movie theme be?

KB: Any title that comes to mind?

“Try To Get Out Of Here Alive”.

KB: How did you spend the last two years during the pandemic?

Mainly in Ireland, in my castle. Doing all the papers, reading all the books. Watching telly. Plenty of walks. Practicing my St. Patrick’s Prayer.