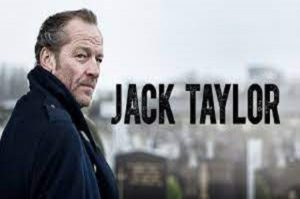 Apart from the Irish, who does not like a dodgy Irish accent?

Plenty don’t. That’s for sure. When Scottish actor, Ian Glen, who went on to find fame in Game of Thrones, adopted one for his role as Jack Taylor, there were howls. It did not stop Magna Films keeping the series going but eventually an axe did fall, and the character was consigned to history.

But before it did, we got a decent little series of adventures and misadventures of a rogue that was full Irish and filled with the mischief of the Emarald Isle and its inhabitants. It attempted to take us out of some of the stereotypes and tried the gritty to make the realism seem like we had landed in the modern era of television drama but for some of the time it could not escape the pithiness and the awkwardness of the origins of the story.

Broadcast by TV3 in Ireland, the 3 series with 9 storylines, saw Taylor, a former policeman with the Garda, cast as a reluctantly enthusiastic private investigator. As a former officer in his hometown, of Galway, he has specialist knowledge of the streets which he uses to outwit, outsmart and embarrass former colleagues.

The origins of the series were the novels of Ken Bruen, who I had never known and have yet to buy the books which shall acquaint me with him, but Taylor hit the cliches – and not all of them bad. Hard drinking, sacked from the police force, an outsider, disheveled, tough to love and with a personal life where his family tree feels more like a jungle, Taylor was clearly from a misbegotten and misadventured life.

Of course, having been sacked for an offence – he assaulted a politician he stopped for a traffic offence – he still has people in the force who will support and work alongside him – notably Officer Kate Noonan, played by Nora-Jane Noone in series 1 and 2 and then Siobhan O’Kelly in series 3.

Making its debut in 2010, these films – they were 90/100 minutes long – managed to make their way onto Channel 5 in the UK and generally had a decent reception. It led to more being commissioned, filmed and broadcast. Glen was clear as to why he took the role, always having wanted to play a Private Eye after seeing Jack Nicholson in Chinatown. The connections between his desire to play the role and the origins of it, were clear. The problem was that Chinatown was quite some time ago…

By 2016, the final films had been aired and the series ended, leaving a legacy which has endured but with a less than celebrated trail of reviews. It managed to bring the idea of a Phillip Marlowe style detective to Ireland, who had the one liner, the languid look all wrapped up in the joy of Glen himself. There were the dodgy deals, the taking of Ireland out of the end of the rainbow mythology and making it grittier and more realistic which worked well enough. The central relationship between the older flawed man and the young ambitious woman never going beyond a father/daughter style of protective partnership, however lacked the spark.

From the very first film, The Guards, it dealt with difficult conversations as the role of the police in an abduction is brought into the public eye. We also had the uncomfortable use of a man who investigates amongst a community that does not like officialdom due to the relationship they had with the officialdom of the oppressor, the British state. By the end of the first series the appalling reality of the Magdalen Laundries, exposed in the film by another Scot Peter Mullen, in The Magdalen Sisters, is also tackled meaning that meaty and very contentious subjects were not being shied away from.

Series Two developed the character and how trouble may be what he wants to run from but it seems to always know his address – even when he finds himself in Dublin rather than Galway. Another standard trope of detective fiction, which always reminds me that I was never cut out to be one – crime never seems to know where I shall be!
The final series, brought us into the world of the corporate as Ireland, by this time, was becoming increasingly The Celtic Economic Tiger of Europe. It explored how finance is gathered and used at the heart of the country in final three films. Another detective fiction trope is that maverick outsiders don’t like the smell of money, not least because they infrequently smell it themselves!

The major issue with the whole series for me was the adoption of the cliched without taking them many places that were new. It felt like a steppingstone rather than a fully formed series. There was an occasional slackness in the script, an attempt to try and make the series stretch rather than tighten the enterprise so that it was taught, full of jeopardy and worth the watch. Jack Taylor is decent enough but hardly sparkling and given the channeling of Jack Nicholson, seemed to parody rather than be a sufficiently half way decent homage.