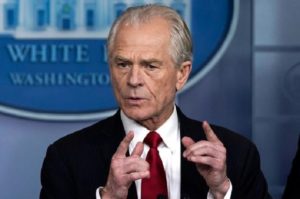 I will try not to snicker through my sadness of seeing Navarro scared out of his mind on The Beat with Ari Melber. I happened to be tuned in to MSNBC when Ari comes on to say he has an exclusive interview with Peter Navarro. Navarro came on before and laid out their plans of a coup; on national tv I might add, so it’s no surprise he has been subpoenaed by the DOJ.
Peter Navarro is very afraid. It is possible that he was triggered when Ari pointed out that he was the first Trump official to be subpoenaed by the DOJ. He also pointed out that this subpoena signaled that the DOJ is widening its probe into the Trump White House.

Navarro tried to say things in that fast, say nothing, Jim Jordan kind of style but leaked that he was in talks with the DOJ. He asked if President Joe Biden could rip executive privilege away from his predecessor. The retort made me chuckle. Ari said “Executive privilege does exist. Your problem is sir, it doesn’t exist for you yet, because Donald Trump does not have your back.”
Navarro is then enraged by a video of Raskin saying that Navarro has no executive privilege because Trump had not proclaimed he was covering him with it. (But also, privilege belongs to the current president.) I never understood why Republicans go into this spill of how Democrats have been after Trump since the Russia hoax and they just want to arrest him, as Navarro did. Hey guess what it’s the freaking job of Congress. Just because you say it in a condescending tone does not mean it is wrong. It is their job to look at any and all threats foreign and domestic. No, they cannot lock him up but they can refer him to the DOJ. Where was this energy when Trump campaigned on “Lock her up”? Maybe Republicans have fallen into the ‘whatever dear leader does is okay’, but we the people have not.

What stuck out to me was that Navarro was sure to say people who are top officials have immunity. How much stuff did they do with the thought in mind that they were immune to any crime? I suppose that’s a question for another day.

I like seeing Navarro scared on TV. I can only imagine how Trump is feeling now the DOJ is looking into January 6th. Sessions is not the Attorney General. Barr is not Attorney General. I know people are frustrated with Garland but I still have hope in him. He has signaled on more than one occasion that he is prepared to go after Trump. We won’t know that answer till the day comes when a former president has to answer for his crimes. I hope they don’t make we the people wait too long.

Ari asked him how he could claim executive privilege when he is speaking about it freely in the public view. He had no real answer. That defiance he had in the interview on June 2nd with Ari probably did not help like he thought. Breaking news says he was indicted on June 3rd for contempt of Congress. He was picked up for his failure to speak to the January 6th committee. I guess he had reason to be afraid. I suppose he now knows that top officials do not have immunity from committing crimes.