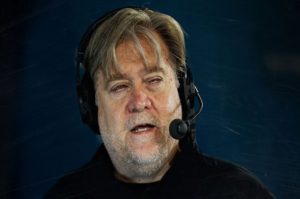 Steve Bannon was pardoned by Trump just before he left office. Although; he was being indicted for stealing from Trump’s faithful supporters, Trump said he needed Bannon to help with his reelection campaign.

Shortly after Bannon was pardoned the DA of Manhattan, Alvin Braggs, started a state case to look into Bannon. They held the investigation so the federal case could continue with the three other guys that were indicted with Bannon. Two of the guys plead guilty which means they took a plea and will give information to the federal case and I am sure on the state case as well. I can only imagine they are very upset that they were left holding the bag while Bannon was pardoned and freed to go be in the public eye and thumb his nose at the case.
Now that the investigation is over and the last guy is on trial the DA is moving forward into looking into Bannon. Friends in Bannon’s circle have stated they have received subpoenas to come speak to the grand jury concerning the case.

Bannon says he knows nothing about the case the state has against him. If he does not know now, I am sure he will find out soon enough about the DA’s case against him. He was prepared to make a stand July 18th where he is due in court to face charges of contempt of Congress.

The walls are closing in. He thought he had evaded the charge but not so fast Steve Bannon looks like justice has more than one road it can travel down.