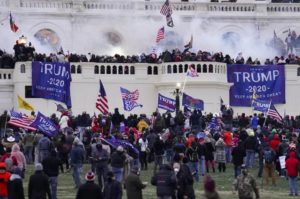 Remember when Rep. Sherrill said she saw someone giving a tour on January 5th? Some Democrats called it a reconnaissance (military observation of a region to locate an enemy or ascertain strategic features) for January 6th. Republicans denied it? Rep. Loudermilk made a big song and dance on how the Democrats were falsely accusing Republicans and wanted them to be put up on ethics charges. He said there weren’t people with red hats touring the Capitol. Turns out he may have been the one giving a tour that day.

The January 6th Committee has done a lot of work. They have uncovered so many things that have shocked us all. Including recently asking that Loudermilk come talk to them because evidence they have, (wait, you said you guys got evidence) contradicts what he has said and they would like him to come and clear the record. I don’t suspect he will go talk to them.

So many of us were excited about the first impeachment of Trump. We knew that the hearings would prove everything he did and America would see Trump’s corruption and would want to act swiftly to remove him from office. Instead, what happened was a circus of Republican clowns did their best to obstruct the proceedings. Even though they took an oath to protect the American people they chose to use their voices to protect the former president. The second impeachment we had a little more hope because some Republicans Congress members joined in on saying Trump should be impeached. We also still had the clowns doing what they could to obstruct the proceedings.

June 9th is when the public hearings will begin. I can only imagine the skepticism that everyone may feel because we’ve had hearings with no consequences before. Why will this be different? It will be different because there will be no clowns obstructing the information. We also don’t have the major stonewall from Trump’s camp or government. Aides are talking. People who are friends are talking.

My suggestion is we all watch or get the cliff notes from your favorite pundits. Republicans will spin what they can because they have no clown car in the hearing. I hope is if Matt Gaetz does what he did to obstruct the hearing during Trump’s first impeachment they sit him in the Capitol jail for the entirety of the hearing. As well as any of them who want to get Trump’s attention for disrupting the hearing.

Stay vigilant. They will want counterprogramming for midterms. Let us ALL use our voices to boost the truth of the hearings.