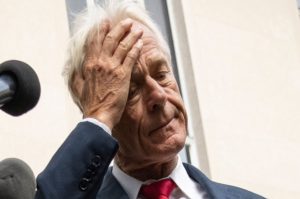 Former Trump aide Peter Navarro is now the second one to be arrested for his refusal to the congressional subpoena by the Jan. 6th Committee. This comes one day after Navarro went on MSNBC to further discuss his role in the plan to throw out electoral votes in a free and fair election to help Donald Trump maintain his power.

While in court, the 72 year-old accused the FBI and federal prosecutors of misconduct. Navarro’s indictment comes just only a week prior to the committee starts the televised hearings on the inquiry into the attack on the Capitol on national television. The panel consists of seven Democrats and two Republicans in the US House of Representatives. They have conducted over 1,000 witnesses.

The first Trump aide to be indicted for contempt charges related to the US Capitol riot. Last November former chief strategist Steve Bannon was charged due to his refusal to cooperate with the Committee’s request. Navarro’s charges follow after he’s consistently refused to provide documents or testimony, and now faces the possibility of up to two years in jail or a fine. He condemned the manner of his arrest on Friday in a Washington airport.

In two separate interviews with MSNBC’s Ari Melber, Mr. Navarro acknowledged that he helped coordinate an effort, code named the “Green Bay Sweep”, meant to help keep Mr Trump, a Republican, in the Oval Office after he lost the 2020 presidential election to the now Democratic President Joe Biden. Mr. Navarro also claimed that he was protected under executive privilege, a claim that even the courts have previously shot down.

Two others have been recommended for contempt of court charges. Dan Scavino, a former deputy chief of staff to Trump, and Mark Meadows, the White House chief of staff under the Trump administration, have yet to receive indictments from the DOJ at this time. Trump has urged his former associates to not cooperate with the Democratic-led committee, which he’s repeatedly called a politically motivated “hoax” and “witch hunt.”