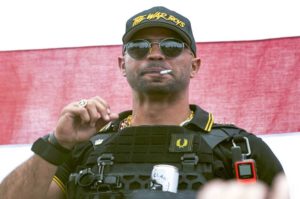 Members of the Proud Boys have been indicted on seditious conspiracy. This includes one of their former leaders Enrique Tarrio who wasn’t even at the rally on January 6th. He was in jail for vandalism of a BLM banner and illegal possession of high-capacity magazines. Seditious conspiracy is conspiring against authority or legitimacy of the state. I suspect that even though Tarrio was not present, he helped to conspire (plan) to prevent the elected President from taking office.

These are not the first charges of seditious conspiracy. Eleven Oath Keepers; including their leader Stewart Rhodes, were also charged as well and await trial. If things go as I hope, these will not be the last charges of seditious conspiracy as it seems the DOJ is working its way up the ladder. Others are not as hopeful as I am but I still believe that justice will be necessary for the sake of history in this nation and to hold on to our democracy.

At least two Proud Boys have already taken plea deals and are cooperating with the DOJ. The Oath Keepers have also experienced members taking a lesser sentence from spilling all the details to the Justice Department. Both of these white supremacists’ groups were thought to be loyal to the cause but when you start looking at the time you can get loyalty goes out the window.
The DOJ is showing us that it was not just focusing on those that entered the Capitol but also those that planed behind the scenes. Garland told us that he would do just that. Like most I am disappointed that the DOJ did not charge Mark Meadows, or Dan Scavino with the misdemeanor charge of contempt of Congress, but I am hoping that they will charge them with the felony charge of seditious conspiracy among other conspiracy charges they have charged others with. Having so many plea deals and so many aides that are openly talking to the January 6th committee those who were active in the attempted coup plot and conspiracy to take over our government will not be able to hide. Please believe there is more to come.