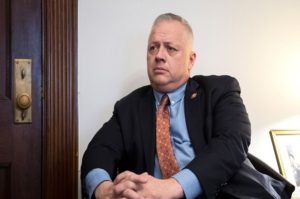 Another one bites the dust. Former Virginia Rep. Denver Riggleman has denounced his affiliation with the current GOP. The former congressman told CNN’s Jake Tapper, “I think the party left me some time ago.” Riggleman previously worked as a technical adviser for the House select committee on the Jan. 6th Capitol attack.

He also confirmed to CNN that he will never run as a Republican again.He “made the decision privately a month or two ago” and was announcing it on Sunday. Riggleman now identifies as an Independent.

Riggleman credits the Committee’s work, and what they found regarding former President Donald Trump’s role in trying to overturn the 2020 election results to maintain power. “And when you see it behind the door, when you see the data, when you see the investigation, when you see those smart people and what they come up with, Jake, it’s absolutely stunning that cult of personality and also the belief systems. I don’t think any real conservative could follow at any point,” he said.

“It’s absolutely insane what people have sort of put their arms around. If you look at ‘Stop the Steal,’ if you look at, you know, some of the Covid issues with the vaccination conspiracy theories, when you look at all the things in total, the fact is that a lot of that has been pushed by people around the President,” Riggleman said, while referring to Trump.