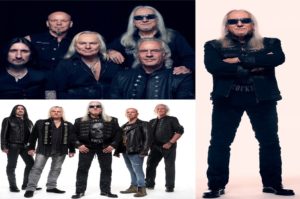 Mick Box is one of the founding members and Lead Guitarist of Uriah Heep. He is the last surviving member of the group’s classic line-up. The band has just finished recording a new album which will be released at some point. Keep an eye out for it. Uriah Heep is touring all over Europe this summer. Go check them out!

KB: The audience knows you best as the lead guitarist of Uriah Heep. You are the last surviving member of the band’s original line-up since 1969: How does this make you feel looking back? Long career

To be honest t is a double edge sword because I am happy to still be on Mother Earth with my family, friends and of course the fans, but I have lost so many good friends along the way, but by still performing in Uriah Heep I am keeping their collective musical legacy alive.

KB: I read that you started the band and called it Hogwash, then it became Spice and then Uriah Heep?

I did smile at the band name ‘Hogwash’ as we were never called that. The band before ‘Spice’ was called ‘The Stalkers’ which was a semi-professional band whereas ‘Spice ‘was a professional band in every sense of the word.

KB: I read you were rehearsing back in 1969 or 1970 with Deep Purple next door. I can imagine it was very loud. Tell me the story

Yes, we did it was in London at a building called the Hanwell Community Centre. There were two halls one with ‘Deep Purple’ rehearsing in and on with ‘Uriah Heep’ rehearsing in it. At the time it was just two bands working hard at their music, but we never actually knew at the time we would both become so successful.

KB: Uriah Heep released albums back-to-back in the early 70s: Why was that? Looking back now would you do again like this?

Well, it is not something I would recommend but we were left with little choice. We did sometimes two albums in one year and toured the world extensively. The reason for this was quite simply the management had invested in the band and of course wanted their money back, which they received back 10-fold or more. There was also a fear that if we did not keep up that pace, we would start to lose our success. This was of course very short sighted of the management because that is when things start to go wrong when you are under so much pressure to deliver albums and perform long exhausting world tours, sometimes stretching to 9 months.

KB: In 1975 you fell off stage in Kentucky and broke a bone in your arm, yet you continued to play. Why did you make this decision? I read you got injections for the pain.

I fell off the stage in America on the first show of the tour dislocating my left arm and on the same night fell off the same stage again and broke 4 bones in my right wrist. The following night in Detroit Cobo Hall we played to 10,000 people and this continued for the next 3 months with 3 pain-killing injections a night and two casts a day, seeing every A&E Hospital in America. As it was the first night of a long tour, I did not want to let anyone down, so I carried on and, in the process, learnt a lot about pain management. I have never been a person to give in easily, but even I have to say that was a tough one.

KB: Looking back at all the albums Uriah Heep made, what is your Top 3 and why?

That is an impossible question to answer and one I would leave for the fans to decide. However there have been some marker albums of success and that would be with ‘Demons and Wizards’ which took us onto the world stage, ‘Abominog’ which gave the band a resurgence especially in the USA and ‘Living the Dream’ our last studio album that was revered by the fans and media alike as being one of the best of our career, which was fantastic seeing as it had been 50 years, and to receive that sort of accolade was fantastic.

KB: In 1977 Uriah Heep toured America supporting Kiss. Paul Stanley said, “They were incredibly professional and so consistent that their worst nights were excellent, and their best were tremendous” What was your reaction to this? It is a nice compliment.

It is a wonderful comment, but we have always taken a lot of pride in our live shows and as Paul said our ‘Live ’73’ album was the template for their own live albums.

KB: What is your Top 3 Uriah Heep songs and why?

Once again impossible as I am a Gemini and what I tell you today will change tomorrow, so I will have to take the marker route again. ‘Gypsy’ ‘July Morning’ Easy Livin’ and I will throw in ‘Lady in Black’ too for good luck.

KB: In 1981/1982 everybody seems to have left the band and you were the only one left with a contract. How on earth did you manage to bring the band back on its feet and back to making music again?

I still have the same passion for our music as I have always had from day one and that passion is my driving force.

KB: In December 1987 Uriah Heep became the first ever Western Rock Band to play Russia: Tell me your feeling? You played for almost 80,000 people for 10 consecutive nights … Mind-blowing

It was an incredible experience. We were invited by Glasnost to be the first western rock band to play in Russia. We played to 180,000 people over 10 nights in the Olympski Stadium. Our music throughout the Communist regime still got through on the black market which was incredible. Through our success in December 1987, it allowed so many other bands to follow in our wake, so in fact we were rock pioneers.

KB: In November last year you said that recording the new album was finished and it was being mixed now. Do you have a release date? A title? Tell me a bit about the new album?

The music is finished, and it is presently being mastered. Then we are deciding the title and getting the artwork and booklet together. Once this is delivered to the Record Company it is in their hands when it is released. It is an album, that is a natural extension of ‘Living the Dream’ our last studio album and we have used the same producer, Jay Ruston. It has all the elements you would expect to find on a Heep album.

KB: If you were to make an album with non-Uriah Heep songs. Just your own favorite songs. You can choose 7: which ones and why?

I have never played anyone else’s songs out of choice, so I cannot answer that question. There are very few covers songs, if any, that are better than the original version in my opinion.