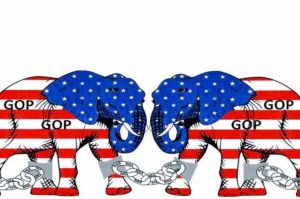 Once upon a time in history people would capture a baby elephant for their personal use. You get them as babies so they are small enough to train. They take the baby elephant and they put a chain around them and attach it to something like a tree or a strong fence. The elephant try as it might cannot get free, and eventually, they give up trying. Elephants have very long memories and they remember that when a chain is attached to them, they cannot get free. Even once they grow big and strong and have the power to move buildings, they still think the chain has the power to stop them so they don’t even try.

The Republican party used to have values. Sadly, it seems that things have changed. The NRA catches them while they are young Republicans running for politics and offers them a chain to put around their neck disguised as money. This chain holds them to one position of protecting the NRA at all cost. Even in the face of kids being slaughtered by guns they protect the guns because the NRA demands it.

Once these Republicans come to full power, they remember that they are bound by the NRA. They get threats of not receiving money if they act like they want to do the right thing and protect Americans from gun violence. They even go against their oath of office to protect guns for the NRA. They say it’s the constitution but that is an outright lie.

The NRA is not what it used to be. Republicans now have the ability to break free of the chains. I cannot tell you why they think if they do the NRA will destroy them; when the NRA has been weakened over the years and cannot bust a grape. Even though they have filed for bankruptcy, Republicans still feel like they are stronger than they are.

I can talk to Republicans all day and tell them they no longer have to be a slave to the NRA, but I know they will not hear me. They no longer have values to hold on to. It’s up to us to fight a dumb elephant that has power but think its power is in its chains.