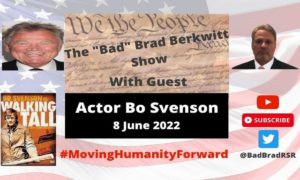 Bo Svenson sat down with “Bad” Brad in a revealing 360 interview for the viewers.

The actor, award winning writer, director, teacher, Judo expert, ex-Marine, and a host of other things gave us a lot to pleasantly unpack.

If I were to sum up Bo’s life, a general term would be adaptation. So how does one have the ability to adapt so well? I point to the unique traits that Mr. Svenson possesses. Number one is honesty. The people you meet can tell if you stretch the truth most often. Combine that with humanity, and folks realize that you are on equal footing. Smarts, toughness, and what I believe is a remarkable memory, add to his ability to adapt. Throw in being a quick learner, and you get the chance to excel at the many things life has to offer.

Early in the interview, I learned that Bo’s father fought to protect Finland against the Russians. I am 48% Finnish. I may owe my very existence to these brave soldiers. Deep thanks and respect. His mother worked as a band leader, and was away from home for much of Bo’s childhood in Sweden. How difficult that must have been. Thankfully, a natural athletic ability gave him outside interests to occupy his time.

After immigrating the US at age 17, Bo enlisted in the Marine Corps and served for 6 years in positions he was not allowed to reveal. The adaptability and smarts were obviously proven.
Bo takes us along with him in a series of odd jobs in an effort to find his true calling. I laughed at his stories. Have you ever tried to rip a phone book in half ? I’ve never been able to do it. Strong hands from the hockey days to be sure.

Soon after, he runs into Oscar Hammerstein’s son, James. Bo is asked to be in the chorus of South Pacific. How unlikely is that? Incredible. A little known fact, I was in the chorus of the same show in 1985. When the theatre bug bites, it gives you the fever. So much fun.

New York City serves as the backdrop for Bo’s continued success as an actor. Screen Gems connections turn into opportunities. Can you imagine his skill at auditions? With NY being a multicultural center, and Mr. Svenson’s quick learning ability with dialects and observation, he becomes a versatile performer.

“Bad” Brad brought up the 1973 TV movie “Frankenstein” in which Bo played the Monster. Mr. Svenson’s eyes lit up. Brad does his homework. He seemed very proud of the colleagues he worked with, and the fact that it only took 2-1/2 days to shoot. No lack of focus or humanity at all.

In 1975, Bo gets cast in movie, The Great Waldo Pepper. He shares the story of Paul Newman replacing him in the role upon news of a visit to the set. Bo left town while shooting! It turns out Newman just stopped by for a friendly visit. Whew!! Brad later asked him to recount a story about an autograph situation involving Newman. Please watch this part of the interview closely. I love how Bo tells the story and the lessons derived from it.

The two Walking Tall movies in which Bo had the starring role were iconic at the time. It was interesting to hear that Mr. Svenson arrived in Tennessee two days prior to shooting to get a deeper understanding of life in rural America. It left a wonderful impression on him. He describes importance of humanity it what he observed. This directly lines up with his natural traits as a person. If you can’t feel it completely, you can’t portray it.

“Bad” Brad brought up the 1979 movie North Dallas Forty. Bo erupted in joyous laughter. He had deep fondness for his colleagues again. The noise must have disrupted the household a bit too much. Bo’s wife is seen closing the door in the background. See what you did, Brad? Very funny.

After the success of the Walking Tall movies, a television series of the same name was created in 1981. Brad astutely asked Bo how they came up with the storyline since the last movie was called Walking Tall: Final Chapter. Mr. Svenson shared the ideas were basically tweaked with a rural flair from the previous shows Police Story and Policewoman. Bo was not happy with the result. In his mind, the audience deserved better.

Bo wrote a recent screenplay called the Red Cloth which has won numerous prestigious awards across the globe. It is the story of men and women fleeing the cruelty of early Christianity in what is now Norway, their arrival in North America five hundred years before Columbus, and the birth there of the first European child. He is actively seeking Arab financing for the film project. One of the story’s characters is a devote Arab Muslim who is the navigator of the ship. Best of luck, Bo!

The most significant part of the entire interview occurred at the end. Brad asked Bo who he would like to meet and why. His response was Putin. He pulled no punches. Vladimir knows a little Judo. Mr. Svenson is a 5th degree black belt. It would be a just end for the atrocities Mr. Putin has committed. Bo is calling for the world to do more. He is absolutely correct.