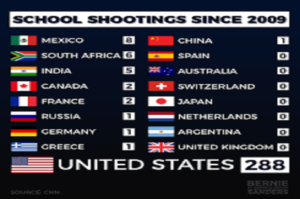 We do not understand why you don’t ever learn. We don’t get it. We simply don’t. We are not arrogant enough to believe we can learn* you but let me try and tell you why from over here things look very stupid over there.

10 years ago, there was Sandy Hook.

We felt great sympathy in Scotland because we had Dunblane. Over 25 years ago a man cut the phone lines in a school, entered it, shot children and a teacher dead before executing himself in the small and sleepy town of Dunblane. We were deeply affected. So were the American people at Sandy Hook.

Australia got it too. They had suffered from the Port Arthur Massacre in 1996 and then the Monash University shootings in 2002. Though neither of these mass shooting events happened in a school, they had a very profound effect on the national psyche. The Australians therefore had sympathy; Scotland held empathy.

Both countries had a good, long hard look at themselves and followed a simplistic logic.

If you would not put a functioning alcoholic in charge of a bar, a practicing drug addict in charge of a drugstore or house a pedophile next to a school, then you need to stop some people being able to access guns.

Since Dunblane and the Monash University shootings, there have been no mass shooting events in either country. None. Nada. Not one.

We were learned by the events and took a very serious telling.

So, we do not understand.

We do not get why there have been 242 school shootings – that is not all the mass shooting events – since Sandy Hook in the United States of America. That equates to one every fifteen or sixteen days.

Every fortnight a group of children have cowered in classrooms, feared for their lives, had their futures affected by night terrors and anxieties and left without the right to feel adventurous because of the actions of adults. In America.

When I say adults, I do not just mean the shooters themselves.

They are, controversially, often the victims of the crime too.

They have been left feeling distressed, excluded and without hope. They are disconnected from a society which does not and cannot care for them and then they go on and they kill. Instead of looking at these people as evil, consider why evil can grow in the first place. Remove the reasons for hate and guess what…

That’s the tough conversation right there. That’s the controversial discussion to be had. How do we work with those who are violent to reduce their violence?

That is not a discussion to be had yet, certainly not whilst the money provided by the NRA for politicians, the custodians of the country flows into their coffers and they vote accordingly. When money talks like that, children do not matter, Americans get tarred with the same brush and people over here start to lump everyone together as one. Mad, bad and dangerous.
So, before you vote for them politicians, ask them this.

Will they represent you or a shadowy organization who pays them?

Then punish them if they do not tell the truth.

In the meantime, do something about gun control, right now, America looks callous, uncaring and rather than the protector of the weak, the world sees you as paid apologists for assassins.

To learn* The Scots expression which means to teach. Therefore someone ill learn ye rather than teach you.