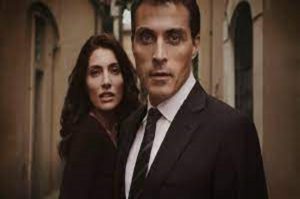 I had read one of Michael Dibdin’s books when there was an announcement that Aurelio Zen, his detective hero, was going to be reimagined on the small screen. It was a time when the United Kingdom was looking more fondly on Europe and a coproduction with ZDF, the German broadcaster, and Mediaset of Italy for the BBC was enticing. With US based WGBH also on board it was a truly international enterprise.

I was excited as the very novel I had read was the first to be adapted. I felt a little ahead of the curve.

Shot entirely on location, in Rome, but shot in English, with mainly English actors in the lead, this was not to show us the brilliance of Roman detectives but confirm the suave arrogance of the Italian male and confirm our doubts over the Machiavellian machinations of Italian public life as being true.

We should not have been surprised. It was all there in the books.

But it suited our nostalgic naivete that, times when the male gaze were being challenged, there remained bastions of misogyny which showed that an office running a book on who was going to sleep with the pretty secretary was still acceptable, as long as we, the audience, were kept in the loop as to who it was that was sleeping with her.
Broadcast just over a decade ago, it still has the style you expect but that it did not last beyond the first series of 3 90-minute films was due to the BBC waking up to realise that there were enough male led detective dramas to do us all for the decade ahead and they were behind its cancellation.

The cast were sublime. Led by Rufus Sewell, who looked as good as Will Smith in a pair of shades, who played Zen, Caterina Murion was the secretary, Tania Moretti, they all chased. She was as intelligent as she was beautiful, but her brains were not quite as exposed as she was throughout. A gruff and disconnected boss who suffers a heart attack, Moscati, played by Stanley Townsend, managed to afford Zen sufficient rope and then had the unenviable task of contemplating retirement whilst his department was under some kind of attack. That attack was simple Italian politics – if they are ever simple.

Ben Miles played Amedeo Colonna, the fixer for “The Minister”, who is, in turn, played by Anthony Higgins. Miles oozes charm and schmoozes threat in equal measure whilst Zen is surrounded by colleagues willing to support him such as Giorgio de Angelis played by – Vincent Riotta – and those who don’t – Ed Stoppard as Vincenzo Fabri.
Fabri represents the powerful and influential as he has an uncle with wealth enough to provide his nephew with the possibility of both. Zen, however, is more capable than most. It makes him a formidable foe.

Zen needs to be.

In the series Zen finds himself at the heart of a plot to discredit him and needs all of his wits to navigate the cesspool in which he finds himself. His old boss, by the end of the three films, will have been comforted by the fact that his throne was being handed to his protégé, Zen himself.

It is a fascinating slice of a time when we thought we were at the heart of European integration. The wide buildings of the series suggested a sophistication and style that some of our British TV lacked. This was decades before Scandi crime TV dramas hit our screens so that we had a taste of the other side of the Channel and mainland Europe was in sight. It was a pity that the storylines depended upon an age-old narrative and did not seek to plough new furrows of a 21st Century plotline that would have better stood the test of time. Certainly, the stylish look captures, but what it delivers needed to be more than standard fare to match the visual flair that it brought to us. It failed to do that. But then again, it did show a slice of the way things were and perhaps that is a parable and a warning that we should not return there ever again.