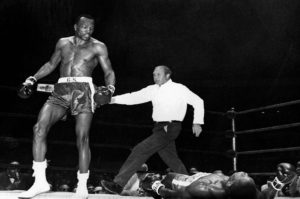 The Deputy Sherriff was one of the first into the International Boxing Hall of Fame, but you might be forgiven for not knowing whose nickname that may be. In an illustrious career he gained the light heavyweight title, defended it 14 times over 6 years, moved up to heavyweight and fought Ali, and Frazier.

Bob Foster, 56-8-1, 48 KOs, even got into the top 100 Ring Magazine greatest punchers, such was his prowess in the ring and with a stoppage rate of 48 within the distance out of 65 fights, it is easy to see why! Unfortunately, both fights with the greats – Ali and Frazier – ended with him being stopped.

Born in Texas, just after American went to war in April 1942, Foster enlisted in the US Air Force, began boxing and in 1959, representing the United States he returned from the Pan American Games with the silver medal at middleweight. In his obituary for the Independent, British boxing pundit and guru, Steve Bunce was to claim that Foster knocked out 89 of the 94 men he beat as an amateur and claimed to have lost just four times.

His ring match with Ali was a rematch as he had sparred in a pre-Olympic camp, with Cassius Clay who was to eventually represent America in a slot which Foster believed should have been his. Clay, as we all know, went to Rome, returned with the Gold and went on to bigger things.

Ironically, he had been offered a slot on the Olympic team – as a middleweight. The irony is that as he turned professional his success was at light heavyweight, but he kept going up to heavyweight to feed his family – weight was always with him as a boxer. But at 6 foot 3, he was never going to be a middleweight and the slot went elsewhere.

His prowess was down to possibly being the single hardest-hitting light-heavyweight in boxing history. Foster was tall, he had long levers – his reach was 79 inches – and his left hook was terrifying.

He entered the professional ranks in 1961 on the 27th of March, when he knocked out Duke Williams in Washington in the second round. His early years were tough, and it as reported he was earning as little as $25 for each fight in the beginning. As he emerged as a contender, he was never able to secure the bigger fights as the politics of international boxing would often intervene and he would not be given the chances he deserved. To keep himself current and to pay the bills, he showed his skills at a higher weight.

In 1962, his first foray into the heavyweight saw him lose when he was stopped by Doug Jones in the 8th round at Madison Square Garden on the 20th of October. Foster had been a late replacement and tasted the canvas in the 1st round before referee Teddy Martin stepped in in the 8th to avoid any further punishment.

But this merely was a bump on the road.

At the end of 1964, at light heavyweight he came up against former world titlist, Henry Hank. He stopped Hank in the 10th round, and this was a big win for Foster.

Hankering after a heavyweight future by 1967, either through politics or by design, he realized that if he wanted a world title it would have to be at the lower weight division. It was not until 1979 that the WBC created the cruiserweight division so smaller heavyweights like Foster were stuck between a division for which they were too cumbersome and one in which they were a little light. By 1967, Foster was the number one ranked light heavyweight in the world.

That meant there as only one thing missing – a title fight. 24th of March 1968, in Madison Square Garden that was resolved, and he went in against Dick Tiger. The contest did not get beyond the fourth round as Foster knocked Tiger out with that famed left hook, to win his first world titles – the WBC and the WBA crowns. It was a massive win for the Texan. Tiger had been a two-time middleweight world champion. At that point Foster had amassed 29 light heavyweight wins and 4 heavyweight defeats. Claiming he had absolutely no nervousness that night Foster had gone in against a huge crowd favorite and quite literally done the business. He was now the world champion.

But politics had played its part and reports suggest that Foster actually had to put up a large amount of his own money, some say $100,000, to get Tiger to fight him.

Foster’s career was never dull and his very first defense of his title saw him hit the canvas in the first round, rise up and knock out his opponent to successfully defend both belts. It was back in MSG on the 22nd of January and his opponent was Frank DePaula. This is a feat that has only been repeated twice since – a champion hitting the canvass in round one, rising up and knocking his opponent out in the same round to win the fight! Foster was the first!

His defense of his title then started to stretch into the 1970’s after he stopped Andy Kendall in 4 rounds in May 1969, then in April 1970 he saw Roger Rouse retire at the end of the 4th round in Missoula and then in June 1970, Mark Tessman got knocked out in the 10th round in Baltimore.

But the lure of the heavyweights was strong and in 1970, he returned to heavies enough times to become a contender. 1970 was therefore notable for another world title attempt for Foster.
1970. 18th November. Detroit. The opponent – Joe Frazier for the WBC title. The result – knocked out in 2 rounds… a few months thereafter Frazier was in the Fight of the Century against Ali. His legendary power in the light heavyweight division, his boxing skill which had seen him beat some pretty decent heavyweights was not enough when up against the world class heavyweight that was Smokin’ Joe.

It was back down to light heavyweights.

For Foster, his world title defenses continued and in 1971, there were 4 defenses ending with the December stoppage of Brian Kelly in 3 rounds in Oklahoma City, after stopping Tommy Hicks in October in Scranton, which followed the points win against Ray Anderson in April in Tamp but had to begin with Hal Carroll being knocked out in Scranton in March.
It was after the Carroll fight that he lost one of his belts. Hardly carelessness but the WBA took the crown from him. But then the WBA stripped him of their light heavyweight title, sanctioned a bout between Vincente Rondon and Jimmy Dupree and Foster watched as one half of his crown was won by Rondon but never lost by Foster. Foster wanted it back but continued in defences against Ray Anderson, Tommy Hucks and Brian Kelly to hold on to his WBC belt. Foster, enraged by this set his sights on regaining that belt and in 1972, in April, in Miami Beach, the new WBA champion Vincent Rondon was stopped in the 2nd round to become the former WBA champion. Foster was back to where he thought he always thought he should be – a two belt world champion.
Then, in June, in Las Vegas, he knocked out an undefeated in 35 contests, Mike Quarry in the 4th round before coming to the UK in the 1972 Ring Magazine Fight of the Year, brutally beating Chris Finnegan; you have to watch the contest through your fingers…

Then came his 1972 fight when he was in against a former sparring partner, no longer called Cassius Clay.

1972. 21st November. Sahara Tahoe Hotel, Stateline. The opponent – Muhammad Ali for the NABF title. The result – knocked out in the 8th round after being floored 7 times… But Foster gave Ali his very first cut eye.

Whilst his attempts at heavyweight were unsuccessful, and the offer made to him for the 1960 Olympics to be a middleweight difficult to fathom, the yo yoing that would have been necessary to just go from one size to another was beyond him. There was little doubt that he was not a heavyweight, and no matter of overindulgence was going to make him a natural heavyweight contender in the same way that his size at middleweight would have weakened him beyond resolve.

Foster then found fame of a different kind when he went in against the white South African, Pierre Fourie not once but twice, beating him on both occasions, making him a hero for the black majority on Fourie’s home nation. The second fight happened in Apartheid South Africa, so he cemented his legacy by truly entering enemy territory to prove his worth. But Foster’s legacy having beaten Fourie the first time in Albuquerque on the 21st of August 1973 on points with that fight in apartheid South Africa, where the government had to sanction the fight and amend regulations to allow a mixed sport, had a mixed reaction. When he beat Fourie a second time in Johannesburg on the 1st of December the same year, and he was only allowed to fight if he refrained from political comment. It was not seen as positive internationally as he had the opportunity to speak out and did not otherwise the South African government would not have sanctioned the contest, many believed he was at fault for not making critical statements. Perhaps, he felt the biggest statement came on the end of both of his fists as he showed once again that racial superiority was a complete myth.

His run as a world champion was coming to an end in 1974 when he faced Argentina’s Jorge Ahumada and could only draw. He temporarily retired straight afterwards.

He came back in 1975 and kept fighting till 1978 and at the age of 36, he finally rested the gloves and went back to putting on a uniform to make a living. This time it was in the Albuquerque police department where he served for over 20 years. Foster died in 2015, aged 73 but his legacy is assured. He was some puncher as two former opponents in Steve Bunce’s obituary testified and it is to them, I leave the final word.

Chris Finnegan remarked: “When you’re in there with Foster it’s like having a loaded gun pointed at your head. One wrong move and the lights go out.”

And to his former sparring partner: “Bob Foster had the punch of a mule,” said Ali their fight in 1972.