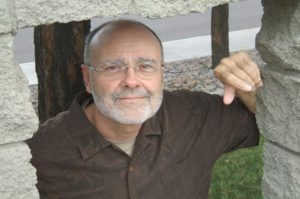 Jim Sallis is a crime author best known for the Lew Griffin series: a detective set in New Orleans. His novel Drive was made into a movie starring Ryan Gosling. He writes poetry as well as shoirt stories and plays in a band called Three-Legged Dog.

KB: What books did you read as a child and did you always want to be a writer? What inspired you?

The earliest adult books I read were science fiction, taken off my older brother’s shelves. Quite early on I became tremendously affected by poetry, especially Edna St. Vincent Millay, and can still quote huge patches of Robert Frost, Dylan Thomas, and Yeats. But the most important single writer for me has to be Theodore Sturgeon, who first brought me to feel that I wanted to write and gave me reason to believe I might be able to do so.

KB: You worked as a magazine editor, book reviewer and columnist: This must have helped you in your career as an author as it makes things a lot easier I would think?

Editing, most definitely. I arrived in London to help edit New Worlds, with maybe three stories pending publication and with absolutely no idea what editors do, flying in both regards by the seat of my pants. There, exposure to European literature, the example and guidance of the amazing Mike Moorcock, and psychic enlargements of being in a different culture all began to form my then-formless self into a writer. Reviewing for the L.A.Times and Washington Post and my books column for the Boston Globe allowed me continuing exposure to wide ranges of writing; to this day I still contribute a book column to The Magazine of Fantasy & Science Fiction, having recently turned in my fiftieth.

KB: Drive was made into a movie with Ryan Gosling. Were you involved in the movie and on the set? Does the movie do your book justice?

I was not involved with the movie but visited on the set and attended the premiere, as well as before and after parties, in L.A. It is by any measure a powerful, deeply artful film, a kind of perfect storm in the way things came magically together: Hoss Amini’s script, the soundtrack, Nic’s direction, the photography, every single performance. Is the film different from the novel? Yes, because the vocabularies of film and fiction in print are necessarily different. But the heart, blood and soul of the novel are palpably there, for me, in every scene of the film.

KB: I love your Lew Griffin series: How did you come up with this character and why did you decide to write in the first person?

In London, Mike had introduced me to Hammett and Chandler. Back in the States, taken with crime fiction, I came upon Chester Himes’ novels. One day I sat down and wrote the first pages of what became The Long-Legged Fly and was well into the narrative before I began to wonder, What is up with this guy? Why is he so filled with anger and disappointment, even rage? Because – of course! how could I not have known? – he is a black man living in the corners and crawlspaces of a white world. As for first person, it wasn’t at the time a decision, just that those initial pages came to me as a voice in my mind, as has subsequently happened with later novels such as Others Of My Kind and Sarah Jane, and with numerous short stories.

KB: The last Lew Griffin novel was in 2003: Will there ever be another one?

For me, those six novels are a complete portrait of a man’s life and no more need be said. The title of the first, from a Yeats poems, seemed to me perfectly suited to Lew: like that long-legged fly on the stream of time, he is apart from his world, watching it pass by. I write many sorts of things and felt these books might benefit from wearing hats to show what sort of thing they were, hence the insect titles. I also considered that this would help suggest that the six books were in their own particular way a single, long novel.

KB: You have your own band called Three-Legged Dog: What instrument do you play and what kind a music?

It’s not my band, it’s a collective trio. We’re all multi-instrumentalists, and haul anywhere from sixteen to twenty instruments on stage: multiple guitars, banjos, accordion, fretless electric and upright basses, cello, fiddle, Dobro and Hawaiian guitars, harmonicas, bouzouki, mandolins. We started out as an oldtime string band playing Appalachian music, blues, and such from the 30s and 40s, but we’ve gone on as well to early country, gospel, swing, old jazz. And originals — two of us write songs.

KB: If you could make a top 7 of your most favorite books (Not your own): What would you pick and why?

This would change from day to day, even hourly, depending on what footpaths or tides my mind may have wandered onto. Books that made indelible impressions upon me include The Dreaming Jewels, More Than Human, Some Of Your Blood, all by Sturgeon; Earth Abides by George R. Stewart; Ulysses; L’Ecume des jours; Robert Heinlein’s The Puppet Masters; Odd John by Olaf Stapledon; Cendrars’ Moravagine; L’Etranger; Cortazar’s short stories.

KB: You write poetry and short stories as well: Who is your favorite poet?

As above: so many I cannot list them. Early favorites, as forementioned, were Millay, Yeats, Frost, Thomas. Robert Creeley. W.S. Merwin was a huge early influence with my own work. Then numerous European poets, Polish, Czech – especially French, of course. Blaise Cendrars was a huge find for me, early on. Guillevic remains a favorite. I love Bonnefoy, Philippe Jaccottet.

KB: Are you currently working on something new?

Always. Recently I wrote a dozen or so new stories, many of them published or set to appear in science fiction magazines, literary journals, anthologies, online. These include three all set in a near future, beginning with “Dayenu” (collected in Dayenu and Other Stories from New Rivers Press); these are loosely linked, providing glimpses of a nation ever in transition. I’ve two novels hanging about the street corners making noise and shuffling feet. Someday they’ll either grow up and leave home or not.