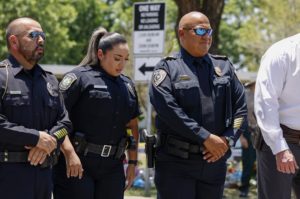 A breaking New York Times report gives further details into the timeline between Uvalde officers responding to the school shooting and when they actually entered the classroom over an hour later.

Per The NY Times report, heavily armed officers delayed confronting the 18-year-old gunman “for more than an hour” even after multiple supervisors on the scene were aware that over a dozen students and teachers were still alive, trapped in the room with him and were in need of immediate medical attention. After a review of both internal video footage and investigative materials, the documents show that instead officers “waited for protective equipment to lower the risk to law enforcement officers.”

The school district police chief, Pete Arredondo, also seemed to be “agonizing” over how long it was taking law enforcement to secure the shields and find a key for the classroom door. The report confirms that the story the public has been told for almost three weeks now by Texas law enforcement officials that officers had been unaware of any survivors or victims needing medical aid were in the room with the gunman. In fact, officials have changed their story over 13 times, including confirming that a door was not left propped open giving the shooter access like they initially claimed.

These reports clearly outline and detail how Chief Pete Arredondo, who now claims he didn’t even know he was the one in charge, and others at the scene had “became aware not everyone inside the classrooms was already dead,” which includes slain teacher Eva Mireles, whose husband was a school district police officer who responded to the tragedy. Mireles had spoken to her husband on the phone during the shooting from the classroom informing him she was shot and needed immediate help.

During the one hour and 17 minutes that law enforcement failed to act, more than a dozen of the 33 children and three teachers inside classrooms 111 and 112 remained alive while the shooting was still actively occurring before four officers broke chain of command and entered. By the end of those 77 minutes, over 60 officers had arrived at the scene.

“People are going to ask why we’re taking so long,” Chief Arredondo could be heard saying, according to the investigators review a transcript of officers’ body camera footage. “We’re trying to preserve the rest of the life.” At this time officials are trying to determine if the failure to intervene in a timely manner resulted in a greater loss of life. Considering teacher Eva Mireles died in the ambulance and three children, including 10-year-old Xavier Lopez, died at the hospital, it’s safe to say their conclusions will show grim results.

While the details of this case are still breaking, and more is being learned in the weeks following the massacre, one thing is for certain about the law enforcement officers who responded to one of the worst shootings in America. When it mattered, the blue lives scattered.