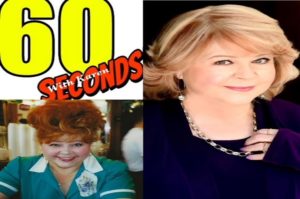 Patrika is an actress who appeared in numerous films and television shows. She is best known as Nancy Wesley in Days of Our Lives and Shirley Spectra in The Bold and The Beautiful. In 2016 she won a Primetime Emmy Award for Outstanding Actress in a Short Form Comedy or Drama Series for her role in the online series Acting Dead: The Very First Winner in that category.

Honestly, it wasn’t a switch at all. I had already been working as an actor, never turning in vacation time at my credit manager job when I got an acting job. One day I was then told by my boss that acting didn’t fit the corporate image and I had to choose between the two. I chose acting obviously. This choice was the best thing that ever happened to me.

KB: People know you from your roles in Days of Our Lives and The Bold and the Beautiful: How did you get these roles and what appealed to you besides working on 2 big shows?

I was offered the parts on both shows which was very flattering and for which I am grateful. They knew me because I had an extensive resume’ from feature films and primetime. They knew I had a lot of experience and could bring something to the table. My resume’ spoke for itself both times. What appeals to me about both of these jobs is the opportunity to work with other talented actors, writers and producers on two iconic shows.

KB: In 2016 you won a Primetime Emmy for a role in an online comedy show called Acting Dead: You were the first ever to win in this category: How does that feel?

It was thrilling and a night I will never forget. Your peers are the ones who vote for you for an Emmy Award. To be acknowledged by my fellow actors is a great feeling. It is both humbling and thrilling. It is sort of a dream come true after so many years’ worth of hard work.

KB: You are working on 2 new movies: Loulou and Open House: Can you tell me what the movies are about and what role you play?

I shot Loulou where I play a nun. This is an independent film that I shot about 3 years ago and it focuses on a kid who feels like an outsider like so many young people do. I have no idea when it is coming out, but I just recently did a whole day of looping for this film. Open House has not come out yet and it is still in production, and it is something that unfortunately I can’t comment on yet.

KB: If you could choose a stage play to star in, which play would it be and why?

I originated a role of Marlene in Daddy’s Dying Who’s Got the Will by Del Shores. Now that I am older, I would love to play the role of Mama Wheelis. I think it would be fun to play another part in this show that I loved working on so much.

KB: If someone offered you the lead in a movie and you could pick 4 actors to star with you, who would you pick and why?

I would give anything to work with Melissa McCarthy because I think I could play her mother in anything. I like her creativity, uninhibited personality and how she always seems to enjoy what she is doing. She always looks like she is having a lot of fun. Melissa has accomplished so much especially when it comes to proving that full figured talented gals can sell seats at the box office!

I would also like to work with Rege’-Jean Page from Bridgerton Season1. You don’t have to ask me why. Just watch him on the show and look at him and you will know why! Lol!

Ricky Gervais would be a blast to work opposite because I think he is a creative genius. He is fearless, clever and very funny. Finally, I would have to say Dame Judy Dench because she is an icon, a professional and I think that I could learn so much from her. Her body of work is incredible, and she never disappoints in her performances.

KB: How did you spend the last 2 years when the world was in lockdown, and you had nowhere to go?

I spent a lot of time at home reading. Yes, it was certainly a chance to catch up on a ton of reading. Like most people, I also spend a lot of time watching movies and streaming series with my husband. We also lost our beloved dog during Covid, and it was very sad for us. We ended up getting a new dog and that helped us to get past our grief and now we have a new little four-legged distraction to love and care for.