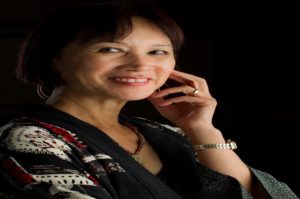 Tess Gerritsen is an Internationally Bestselling Author of Suspense Novels and Romantice Thrillers. Her books about homicide detective Jane Rizzoli and medical examiner Maura Isles have been made into a TV series. The latest Rizzoli & Isles novel will be published on 5th July and is called “ Listen To Me”.

KB: What were your favorite books as a kid?

I loved the Nancy Drew mystery series, starring a girl detective. Nancy was my role model — intelligent, independent, and fearless. As an older child, I became a fan of Sherlock Holmes stories, as well as Tolkien’s “Lord of the Rings” series.

KB: You went to medical school and became a physician: What inspired you in becoming a writer?

I knew I wanted to be a storyteller when I was only seven years old. My father advised me that it wasn’t a way to make a decent living, so I pursued a career in medicine. But all through my medical training, my desire to be a writer never left me. Finally, when I was on maternity leave from my hospital work, I had a chance to write. I wrote my first book while my sons were both toddlers.

KB: Call After Midnight was your first published novel: How long did it take you to write this and what inspired the story idea?

That probably took me about a year to write, and I wrote it while also being a mom and a part-time doctor! The plot was inspired by watching a rather awful TV movie about a woman whose husband has been reported dead. She investigates if he really is dead, and how it happened. The movie, unfortunately, was a big disappointment, but the premise: “Am I or am I not a widow?” stuck with me. That became the jumping-off point for Call After Midnight. My heroine receives a call from the state department that her husband has died in a hotel fire in Berlin. On the day of the funeral, she receives a phone call … from her husband. And she takes off for Europe to find him.

KB: Your books Rizzoli & Isles were made into a TV series: Have you seen it, were you involved in the show and did it do your books justice?

The TV series was written by a team of television writers, and they chose to diverge a bit from my novels. Of course I watched the show, which is quite a bit more glamorous and funny than my novels. I understood why the TV adaptation was different from the books, and clearly they did a lot right, as the series went on for seven years. The only involvement I had with the show was to appear in an episode in the last season (playing “author Tess Gerritsen!”). One of the episodes was based loosely on a short story I wrote called “John Doe.”

KB: You co-wrote the story and screenplay for Adrift which was made into a TV movie with Kate Jackson and Bruce Greenwood: What is easier? Writing screenplays or writing books and why?

They’re very different forms of writing, but I find writing screenplays a great deal of fun and in some ways, a lot easier. In both novels as well as scripts, the most important thing is character, character, character. It’s what makes a script come alive, so your sole focus is on who these people are, their motives, and their dialogue. In a novel, you’re also juggling narrative and inner thoughts and setting. I love going back and forth between scripts and novels, because the storytelling never gets boring!

KB: You composed a musical piece “Incendio” for violin and piano which is part of your novel “Playing With Fire”: Will you do more music compositions? Maybe record an album?

That composition “Incendio” was a completely unexpected part of the storytelling. I had been writing Playing With Fire, about a mysterious violin piece that seems to be haunted, and I had described it in such detail that those details must have affected my dreams. I woke up one morning with the melody itself in my head. I sat down at the piano that morning and began writing down the music, never realizing it would turn into a full-fledged violin composition. That’s never happened to me before, and I doubt it will ever happen again. It’s as if “Incendio” was just waiting to be composed.

KB: You have done romantic thrillers, medical thrillers, crime thrillers: Any other genre you would like to write and why?

I would like to write more historical novels. I’ve written two (The Bone Garden and Playing With Fire). I love delving into the past, especially the history of medicine.

KB: Your 2011 novel ‘The Silent Girl’ has a Chinese Chef as one of the murder victims: Is this character based on your father who was sea food chef? I read that your mother told you traditional Chinese stories ?

Yes, my dad did work as a cook in a Chinese seafood restaurant, and that was one of the inspirations for that story. It was also inspired by my mother’s ghost stories from China. She truly believed in ghosts, and I wanted to weave those tales, as well as the traditional Chinese legend of The Monkey King, into a novel. The Monkey King is a hero, of sorts, dedicated to righting wrongs, so of course he would come to symbolize the hero in Silent Girl. And a real person inspired one of the characters, Iris. She’s based on a female martial arts master in Boston named Bow Sim Mark. She introduced Chinese martial arts to the US, and was legendary for her fighting skills, even at 70.

KB: If you could make a top 7 of your favorite books (Not your own): which books would you pick and why?

This is too difficult a question! I don’t think I can answer it because my favorite books keep changing.

KB: Stephen King says you are better than Michael Crichton: What is your reaction?

Both grateful and flattered. Crichton was the master of the science thriller, able to take one little scientific concept and spin an entire novel around it. (E.g. dinosaur DNA!)

KB: Your next novel will be another Rizzoli & Isles called “Listen To Me” which will be published on 5 July. ( I can’t wait to read this book. I love this series! ). What is the plot about and how long did it take you to write it?

It brings Jane’s mother, Angela Rizzoli, to center stage. Angela has devoted her life to being a wife and a mother, and now that her kids are grown and her husband’s left her for another woman, Angela finds herself living alone, with too much time on her hands. She’s a very observant, very clever woman (which is why Jane is such a good detective) and she’s certain that the new neighbors across the street are up to no good. When a girl in the neighborhood disappears, Angela tries to get Jane to investigate, but to no avail. Jane and Maura are busy investigating their own case, the murder of a hospital nurse, and they don’t have time to listen to Angela. So Angela’s forced to investigate on her own … with disastrous results. I wanted to explore the point of view of an older woman. They’re so often ignored or made to feel invisible. That’s how Angela feels — unheard and invisible. But in Listen To Me, we see just how valuable an older woman’s insight can be.