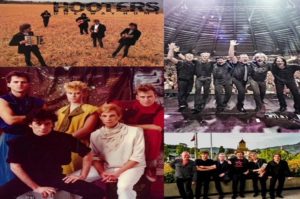 The Hooters is a band from Philadelphia who are best known for their hits “All You Zombies” and “Satelite”. They are celebrating their 40th anniversary in 2022 by going on tour all over Europe starting on 28th June in Bensheim, Germany.

KB: You are from Philadelphia? How did you come up with the band’s name?

Yes, although some of the band members live elsewhere (including Stockholm, Sweden), Philadelphia remains our main base of operations since we started in 1980. And in my opinion, Philly is a big city with a small-town heart and a really great music town as well. Ask any musician that’s played here! The band’s name came from our slang nickname for the instrument called a Melodica. We think it makes a “hooting” sound and that’s our meaning for it. The name originally had a bit of a Jamaican Reggae-Rasta feel too in the early days.

KB: In 1983 Eric and you were asked to write, arrange and perform on the then unknown singer Cyndi Lauper’s debut album? Tell me the story as Time after Time won a Grammy with you singing?

Eric and I became Cyndi’s “band” for her debut album when our good friend (and former drummer) Rick Chertoff introduced us. At this time Rick was a Staff Producer for Columbia/Epic records and was producing Cyndi’s debut album, “She’s So Unusual”. “Time After Time” came right at the end of a long period working together on her album. We didn’t even have time for a demo – Cyndi and I wrote it in the studio and went right to tape to record it. Eric played all the wonderful guitar parts, I played keyboards and sang the harmony, and of course, Cyndi’s vocal was just perfection. Fortunately it came together very quickly without much time to change or reflect. It’s a real thrill when that happens… We actually didn’t win a Grammy but we were so excited to be nominated as “Song of the Year” – we attended the ceremonies in LA and sat near Bruce Springsteen and Prince. What a great experience. And it was matched when my Hooter-partner Eric Bazilian was also Grammy nominated for “Song Of The Year”, for writing “One Of Us” for Joan Osborne. We wrote and played on her album as well. Those were some fantastic times for us.

KB: “All You Zombies” is a song from your debut album Amore but it became popular after you hit the big time: What is the song about?

“All You Zombies” was one of the very first songs we wrote for The Hooters, way back in 1980. But we still don’t know exactly what it’s all about – sometimes that happens when you’re writing, but all too rarely! It’s a beautiful thing when people love a song with so much mystery about it, even for us…I guess the song simply means whatever you’d like to be. And that’s Ok.

KB: You were the opening act in Philadelphia during Live Aid 1985: How was that playing for millions worldwide on TV and in the stadium?

July 13, 1985, JFK Stadium – the biggest concert ever is now happening in London and in our hometown of Philadelphia. We were honored to be the “local” band welcoming everyone to our great city. It was very hot, very intense, and very unforgettable of course. We played 2 songs at 9.00am, it was already packed, and the line-up in Philly was incredible. Still hard to believe it happened.

KB: In 1987 you had a huge hit all over Europe with “Satelite”: I have always loved that song. What is the story behind it? I think it is about TV preachers?

Well yes, there were some big scandals during the mid-80s in the States about “TV Preachers” who were asking for (and getting) large sums of money over the airwaves (aka “Satellite”). Some of this money was going elsewhere besides the church. This really still continues in some places with large congregations taking place online now. Yes, God did buy them a satellite…take it as you will.

KB: In 1990 Roger Waters asked you to appear at The Wall concert in Berlin? Tell me the story

Around ‘87 or ‘88 we played the Town & Country Club in London when “Satellite” was really breaking as a single. After the show while we were getting changed in the dressing room, someone said Roger Waters was in the house, caught the show, and wanted to say hello. (I think he was fan of “All You Zombies” which did have a bit of Pink Floyd feel and production.) Of course, we thought it was joke at first but we went back out into the theater and there was Roger. We struck up a friendship and then in 1990 he invited us over to be a part of “The Wall” concert in Berlin at Potsdamer Platz. We played an opening set in the afternoon and also had a brief cameo in the song “Mother” during the main concert. What a thrill.

Starting in 1980, we spent the next 15 years with almost non-stop performing, writing, recording, finally touring internationally and really living out our dreams. But then one day it’s time for a break – emotionally and physically. So we took one. And at this point some of us were married, some had kids, and we were still living pretty much on the road or in the studio. Something had to give. We took a break, working on various other projects. And then we were invited to play a big show in a Philly arena celebrating Pierre Robert, a long-running DJ with Philly rock radio and a great friend. We played a 30 minute set and instantly realized we needed to get back to it. And so we did.

KB: Are there any artists right now who you would like to collaborate with and why?

Well that’s an excellent question – quite a few of course! But honestly, it’s probably the “old guard”, the living legends, those getting up there in the years – that’s where you could learn the most and still have the best time. I would especially like to work with any of the classic reggae players and singers, the real roots music of Jamaica that I love so much.

KB: If you could make an album with 7 of your favorite songs (not your own): which songs would you pick and why?

Well, we’ve already done so many covers in so many bands over the years. And with us, it’s really a process we call “Hooterization”. Take a song and make it your own, say something new. And we know it when we hear it! So do the fans. I’m not sure where else to look. And the classics are the classics and shall remain so.

KB: You have been together now for 40 years and are touring Europe this summer? Tell me more

2022 marks our 42nd year playing together onstage. We’ve have some had personnel changes over the early years but this lineup has been steady for a long time now and we truly believe our shows are better than ever. And for some fantastic reason, we’ve had this long-standing opportunity to tour Europe over and over again – our relationship with the fans and their spirit at our live shows is really remarkable. It can be a long, grueling trip but we still look forward to each Euro-Tour very much, especially in the summer. We are certainly “looser” now onstage and having more fun than ever, appreciating every moment up there. And we all still really enjoy jamming with each other at these shows. It’s always amazing that people are so surprised when they see us having such a good time onstage – isn’t that what it’s all about? Come get Hooterized with us…Cheers! 🎶