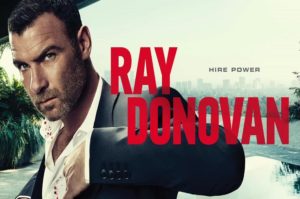 Apparently, there is a movie made which shall finish this story with all of the threads woven correctly into answers rather than left for our imagination to solve – it has yet to hit our screens in Britain. I shall be hooked into watching…

Because Ray Donovan screamed across our screens for seven seasons and was an absolute blast for the vast majority of it. I was not always a huge fan but the fact that I would always look first to see whether I had recorded the latest episode, before looking to see what else was worth watching made me realize that by the 4th or 5th season, I was utterly hooked. This CBS/Showtime classic simply fizzed and brought fully rounded screwups into my living room on a weekly basis that I was delighted to welcome and indulge.

Ray Donovan, played by Liv Schreiber, is a fixer. He goes round the celebrity circuit making things go away. His family are a distinctive bunch of misfits. And at the head, Ray is the perfect functioning maverick with a passionate backstory which weaves its way through the storylines and brings quite the intrigue to play.

Ray is hard to read. He is a devoted husband who strays, a passionate father who struggles to parent, and most of all, he is a family man wishing to have his father killed. Not much to worry about in there! And over 82 episodes don’t we just want to analyze and discover more!

It was originally based in Los Angeles and then moved to New York for the final two seasons, mainly due to the loss of the love of his life but this move enhanced rather than detracted from the tale – unlike so many other television series. Around series three, I had begun to waver in my devotion but there was something about the strength of each characterization which drew me back in, wanting much more.

Of course, given that it is played out in a world unlike my own was a boon to my fascination. In this world, the Kardashian like people who fall foul of their own indulgences need a man to come in, wipe away their tears, make it all right and walk tall by their sides, even when they are not there, is hypnotic for the times in which we live.

But then, as always, here comes the family.

Mickey Donovan, played by Jon Voight, in a masterclass performance, is a schemer and con artist who is always one deal away from being the big guy, the mob boss, the man who has. His scheming and duplicity damage all who touch him. By the end of the 7th series, Ray can take no more of Mickey and having tried to have him sent to prison and get him as far away from the family as possible, he is left with a simple, single conclusion – there needs to be an ultimate solution. Mickey though is a tough nut to nail down, never mind crack. After all, even the FBI cannot solve the Mickey conundrum.

The family spawned by Mickey were, therefore, quite the cast of characters themselves.

Terry, played by English actor, Eddie Marsan is loosely based on boxing trainer Freddie Roach, as Terry has Parkinson’s, and was a former boxer. His search for true love is a tragic tale as is his desire to find anything which shall help his disease. Life is complicated for Terry when he admits his relationship with Ray’s wife and there is a schism in their relationship, but that reduces a wonderful performance and an exceptional character to one episode. Terry was so much more than that.

Bunchy, played by Dash Mihok is a repressed man who also struggles with love but this is partly due to abuse he suffered at the hands of a priest which we discover during the seven seasons is a common experience for all the brothers. Bunchy has a limited emotional canvas which makes him vulnerable and easy to manipulate. Mickey abuses that.

Daryll, a half-brother, played by Pooch Hall, as an outsider, manages to become involved in the family and their plotting but it takes time and the ability of the other brothers to get over their father’s infidelity and their bond with their own mother. It makes Daryll open to Mickey taking advantage and he does.

Ray’s own family is also complex. His long-suffering wife, Abby, played by Paula Malcolmson, dies in season five from cancer, a rather mundane ending given the narrative, but it has a profound effect on Ray; not least of which is relocating entirely to the Big Apple. He continues to see her in visions.

His children, Bridget, played by Kerris Dorsey and Conor, played by Devon Bagby, are intriguing and difficult. Bridget marries early and without her father’s consent whilst Conor leaves the show storyline in season 6.

Support for Ray in his “business” comes from Avi Rudin, played by Steven Bauer and Lena Burnham played by Katherine Moening who do almost anything they can for their boss. Former Mossad agent, Rudin is forced to disappear in season 5; nothing is ever easy…

The back-up, in recurring characters include performances from Susan Sarandon, Eliot Gould, Paul Michael Glaser, Rosanna Arquette, Brian Geraghty, Katie Holmes, Stacey Keach, Wendell Pearce and a host of others who fly in, leave their imprint and rock out.

The greatest shock of the series was the ending of season seven. There was no warning it would end. There were rumors that an 8th season was planned out, but CBS was having none of it. We heard through cast twitter feeds that it was all over, and the season 7 finale left Mickey on the run and so many threads hanging that fans went crazy. They bombarded the studio in protest and what do you know? In 2021 a movie was made. We have yet to see it in the UK.

And so, my journey with Ray is incomplete. I may comeback and tell you what I thought. I may keep that to myself because Ray Donovan, given the plethora of awards it was nominated for throughout its run, is a phenomenon. It is likely you know long before I do!