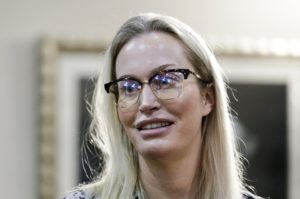 Florida’s biggest bowling ball of a bitch seems to be getting praised left and right by media outlets for his financial records showing him as boring, yet there seems to be a movement to forget that his spokeswoman illegal operated as a foreign agent for her work for president of Georgia (the country, not state folks) Mikhail Saakashvilli.

The Washington Post reported earlier this month that Governor Ron DeSantis’ press secretary, Christina Pushaw, “belatedly” registered as a foreign agent for her work for Saakashvilli from 2018 to 2020. The Post’s report shows that the U.S. Department of Justice had contacted Ms. Pushaw, and informed her that under the Foreign Agents Registration Act she was required to file her registration accordingly. While Democrats, including Florida’s top two liberal gubernatorial candidates, were quick to criticize Pushaw, DeSantis called it a “smear campaign” against her.

“I am not deterred by any smear piece from these legacy media outlets. The only reason they’re attacking her is because she does a great job, and she’s very effective at calling out their lies and their phony narratives. And so, whenever they’re smearing somebody, you know that person is over the target, and so they’re scared of that. I would be much more concerned with my press secretary if The Washington Post was writing puff pieces about her,” DeSantis told reporters at a press conference when asked about her failure to follow federal law. Hmm…seems a little suspish that the fat frownie face is quick to defend an unregistered agent but quick to attack other Americans.

Pushaw is a useless individual though who is getting easy money as Press Secretary to spend time on Twitter “debunking false Narratives about Florida” and the governor, per her Twitter bio. Pushaw told WPTV News in response to the reports that, “The governor said it better than I could. It is an attempt at a smear. It’s non-news.” She added that she “worked for a Ukrainian politician, former president of Georgia, ending in 2020. I started working in Florida six months later, so it has nothing to do with my work in Florida.”

It may have had nothing to do with her work in Florida, but it sure as hell had a part to play in her getting the job in the Governor’s office in my opinion. But anyone who works for a totalitarian wannabe loser like DeSantis doesn’t believe in the rule of law to begin with. Every single one of these chicken heads will hopefully be fired in November or else we are really screwed here in the Sunshine State.