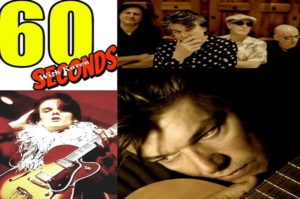 The Blow Monkeys is an 80s pop band with front man Dr. Robert. Their biggest hits are “Digging Your Scene” and “It Doesn’t Have To Be This Way”. They are on tour through The UK this summer. Go check them out…

KB: Did you always wanted to be a singer and musician?

I didn’t have any plan when I was a kid other than to be a cricketer or a footballer. Its only when I picked up my sisters guitar one day when I was 15 that my life changed.

KB: Where does the name Dr. Robert come from?

I thought a singer needs a pseudonym. I didn’t want to be Bruce Howard anymore. Actually, my real name is Bruce Hoare. I wish I’d used that.

KB: Your biggest hit is “Digging Your Scene”: A song about the backlash people with HIV and Aids face. What inspired you to write a song like that?

When Donna Summer said it was “God Revenge” that spurred me on to write a song celebrating the gay scene.

KB: The Blow Monkeys are known for their very styled appearance: Who came up with the idea and who styled you?

Nobody styled us. We styled ourselves. We occupied the Oscar Wilde faction of the ‘Soul’solist movement.

KB: The band split up in 1990 and reunited in 2007: Why did the band broke up and what was the reason getting back together again?

We broke up because we had been together ten years and wanted to try something else. We got back together because we love each other.

KB: If you were to make an album with 7 of your favorite songs (No Blow Monkeys or your own): What songs would you pick?

I have no idea to be honest. It changes every day. Ok.